Two Air Algerie pilots were reportedly suspended after they allowed a 10-year-old boy take control of a plane. In a video released, you can see the boy using the controls in the cockpit while the two explain him the functions during a commercial passenger flight in Algeria.

Dressed in black tie and captain’s hat, boy goes on to push buttons and take control whilst being supervised by the pilot. Local reports suggest that the boy who is believed to be an orphan dreamt of becoming a pilot and the whole stunt was a part of a children’s charity in a TV show. The boy “was very disciplined, calm and attentive. I am sure he will make a good pilot,” one of the pilots is heard saying in the video.

Read More: Disabled man forced to crawl to board aircraft in Japan

Before boarding the flight, the pilots gave the young boy a tour of the plane and explained him the functions of the aircraft. What is being touted as a breach of civil aviation rules, the pilot affirmed that the child was able to handle the aircraft and that he was not just pretending but actually manipulating the plane. 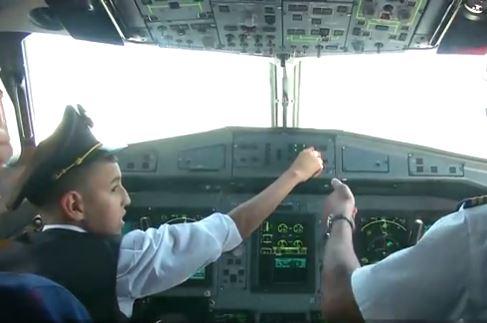 The incident came to the light after the video was released by Algeria’s El Bilad TV. Both the pilots were suspended soon after that. The officials are currently investigating the incident.

The aircraft ATR 72-600 can carry over 80 passengers can crew. However, how many people were on board during this particular incident has not been ascertained as yet. At least 75 people flying on Aeroflot flight 593, to Hong Kong were killed after the pilot let his teenage son on the flight deck and accidentally turned off plane’s auto pilot mode. The flight crashed into a mountain killing all the passengers and crew on board in 1994.