Google’s interest in India is not unknown but the global tech giant has recently taken another leap.

A Bengaluru based task management company Dunzo has become the first Indian start up to have drawn direct investment from Google.

The search engine infused Rs 64.58 crore in the hyperlocal startup in a Series B funding round, which also saw its existing investors, Blume Ventures and Aspada putting in Rs 3.75 crore and Rs 12.5 crore respectively.

Simply put, the Bengaluru based start up runs errands for its customers across the city. You just need to download the app and prepare a list of tasks you want done. It could be getting your suits dry-cleaned or picking up food from a restaurant or grocery or even picking up your mobile charger you forgot at a friend’s place, Dunzo does it all for you.

Also Read: Why the UC Browser app has been removed from Google Play Store

The company’s website reads,”We get things done for you. Everything that just takes up time at your end can be dunzo-ed. Be it visits to the grocery store, special plans for occasions or fixing something at home, Dunzo will get it done.” 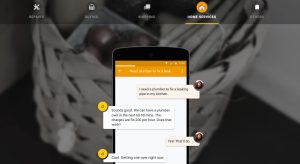 Founded in 2015 by Ankur Aggarwal, Dalvir Suri, Mukund Jha and Kabeer Biswas, Dunzo is currently handling 3,500-4,000 tasks a day and eyeing to scale up its operations to one lakh tasks per day by the end of next year.

The startup, which is present only in Bengaluru right now, is planning to expand its operations to other cities as well.

The company has over 1350 riders active for completing tasks and claims to have logistically broken even in Bengaluru, saying that delivery charges cover the logistics costs per delivery.

What may have piqued Google’s interest

Google has been making a series of moves to expand its market in India, especially with its new Next Billion Users (NBU) program. Latest moves by Google in the country, include WiFi at major railway stations, YouTube Lite, Android Go and Android One. When Dunzo entered the hyperlocal market, it was an overcrowded segment.

However, Dunzo is now among few hyperlocal startups to have survived in this sector. Several others such as Grofers, Genie, and Local Banya failed at this model. The other startups in the sector which are performing reasonably well are BookMyChotu and DoneThing. Both of these operate in the Delhi-National Capital Region.

Also Read: Do you know Google keeps a record of everything you search?

“When we invested in Dunzo in 2015, there were more than 60 startups in the hyper-local segment; most of them have shut down. (Whereas Dunzo) have spent zero money on customer acquisition, have grown 8 times in one year, while maintaining 50% customer retention at a 6-month mark with just $2 million,” Sahil Kini, principal at Aspada Investments, told The Economic Times