Congress President Sonia Gandhi’s son-in-law Robert Vadra gave his two bits on demonetization today. Vadra said that he doubts if the policy was correctly implemented. He also expressed his concerns for the rural citizens who do not have bank accounts and are not able to withdraw/ deposit money. However, his rant against demonetisation didn’t go down well  with Twitterati. 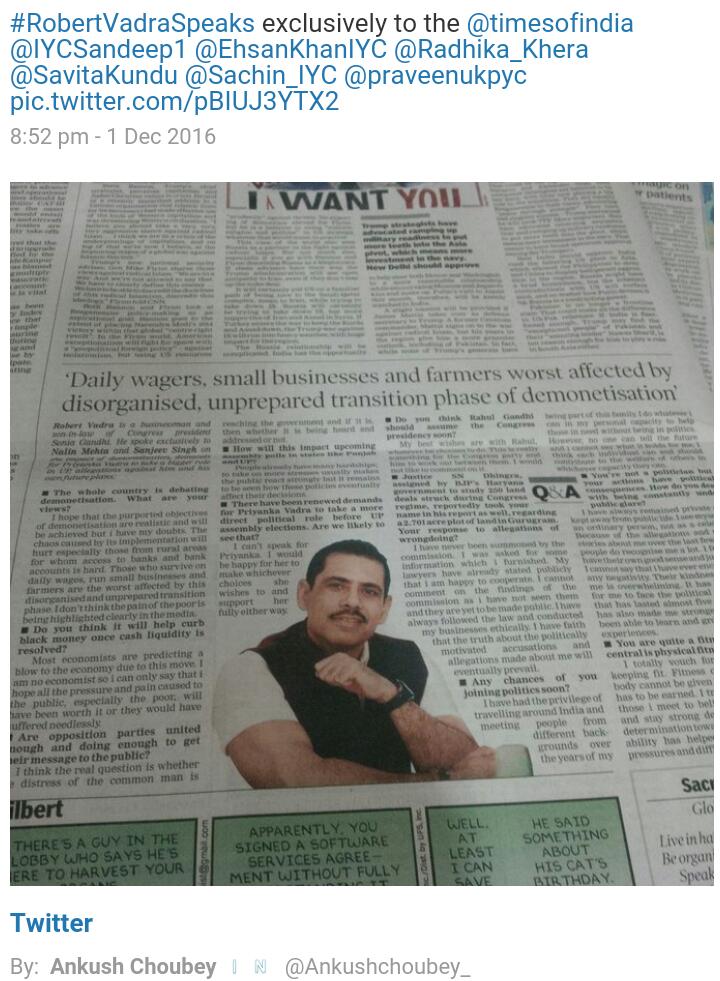 Probably, because this was the first time he showed his concern for rural people and farmers. Twitterati felt this concern wasn’t a result of his empathy for the poor but because of his relationship with the Gandhis and the Congress. Here are some hilarious #RobertVadraSpeaks Tweets that will leave you in splits!

1. They trolled his lack of credibility

2. The man with no self-identity speaks for himself.

Robert vadra talking abt farmers is like @ArvindKejriwal talking abt governance,@BDUTT abt fair journalism#RobertVadraSpeaks

After Amartya Sen, Robber Vadra is the topmost economist from India. #RobertVadraSpeaks

5. Robert Vadra is the one responsible for the farmers’ condition in the first place!

Doesn’t he realise farmers are troubled for last 60 years because of Congress govt? #RobertVadraSpeaks

#RobertVadraSpeaks I have great respect for him..Its not everyday a suicidal scrap dealer family snares the 1st daughter of the country

8. It’s better to stay silent when you don’t have anything substantial to say.

If he had paid attention in his class he would’ve learnt Silence is Golden. #RobertVadraSpeaks

10 Robert understands the pain of the farmers

Somebody actually sought for his opinion? Wow… That scribe and publication should be lauded!! #RobertVadraSpeaks

12 He knows about the struggles of farmers!

Poorest farmer in the country Sri Sri Robert Vadraji speaks against demonetization. We stand with him_#RobertVadraSpeaks

13 He probably took up farming as his hobby.

14 That awkward moment when you lose your Black Money

#RobertVadraSpeaks on #DeMonetisation. Seems legit. DamaadJi’s #BlackMoney must have been laid to waste. Modi Govt must tighten grip on him.