Sexism at the workplace is quite common. Women have repeatedly been subjected to demotivating remarks and snide comments as to why they don’t deserve the positions they hold or a promotion that they have earned. In this constant rat race to get on top, women have been, quite demeaningly been told that they are only as good as a secretary. In a recent example a student of the University of California, Azita Rahman was promoted over her male co-worker and she received flak for it. During the internship program where she was working, she was promoted up the ladder and her male counterpart was not very pleased. Azita encountered a nasty message from her coworker who said that he was “not being sexist” but well he proved otherwise. According to him, she didn’t deserve the promotion. He went on to narrate how Azita was “too emotional” in her decision-making skills.  He then went on to mansplain how men were more competent and were perhaps better suited to work with numbers than women accountants. He went as far ahead to suggest that she would probably be better off as a, wait for it, SECRETARY! 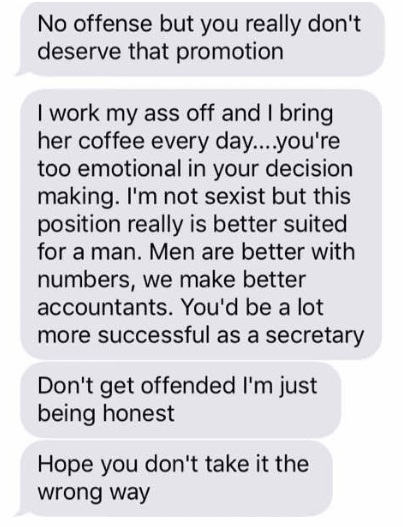 Also Read: King of sexism and abuse: Why Singer Abhijeet Bhattacharya needs to be banned from Twitter ASAP [Opinion]

Azita was having none of the bull**** and so she came out with her defence shield slung around her shoulder. She explained, with poise, how there was a difference between him and herself. Instead of acting like an entitled person while she worked hard and earned her promotion. She went on to describe the reasons why she thinks she basically deserved the promotion more than him. Azita felt the need to give a solid reply to her fellow colleague because she had been on the receiving end of sexism at her workplace before. 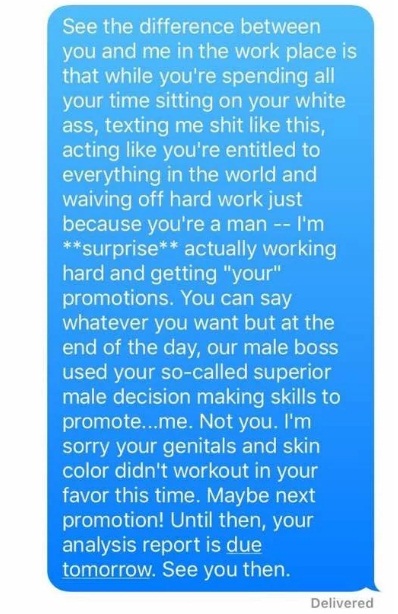 Azita has for now deleted the original tweet after random news websites began using her personal information without her consent and despite her protests. 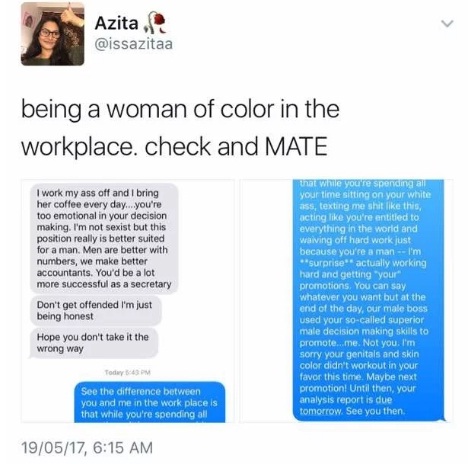