Reliance Jio has disrupted the Indian telecom market ever since it was launched back in September 2016. The company introduced lucrative plans offering packs that coupled unlimited voice calls with data plans at relatively low prices. This created a ripple effect in the Indian telecom sector as telcos, which were otherwise offering their services at high prices, started offering plans at competitive prices in order to prevent their customers from migrating to Jio’s network.

After establishing its precedence amongst other service providers, Jio launched ‘India ka Smartphone‘– Jio Phone at the company’s Annual General Meeting in Mumbai. At the time of the launch, Reliance Industries chairman Mukesh Ambani announced that voice calls will always be free on the Jio Phone and that the users will get unlimited data on the device. Couple with an effective pricing of Rs ‘O’, the device not only wooed the people in general but also appealed to the users who were planning to migrate from 2G network to 4G network directly.

Days after Reliance Industries made its big announcement, Idea Cellular announced that it was working on a 4G smartphone that would be priced around Rs 2500. Though the device is still in the planning phase, the phone will allow users to select between 2G and 4G networks. More importantly, it would allow users to use apps of their choice. Unlike in the case of Jio Phone, users will have to depend on the suite of applications provided by Jio. 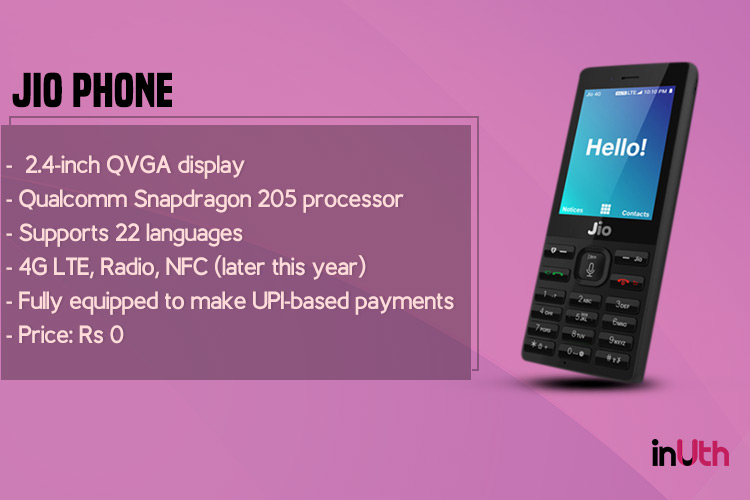 And now another candidate has entered the battle field.  Indian electronics company Intex recently unveiled its first 4G VOLTE feature phone. Intex Turbo+ 4G is a part of the company’s Navratna series which is priced between Rs 700 and Rs 1500. It is powered by a dual-core processor and runs on KaiOS operating system. The device sports a 2.4-inch QVGA display and comes with 512MB RAM, 4GB internal memory, and 2,000 mAh battery.

ALSO READ: Jio vs Vodafone, Idea, Airtel, BSNL: Find out the best plan for you

In comparison, Jio Phone and Intex Turbo+ 4G pack similar features. But Intex Turbo+ 4G has an edge over the Jio Phone as it allows users to use any SIM in the handset, which is not possible in Jio Phone. While ‘Rs 0’ effective pricing might seem tempting in the beginning, it’s important to note that the users will have to make a security deposit of Rs 1500 at the time of the purchase, which is refundable only after 3 years. How this turf war changes the country remains a thing to be seen. What we know for sure is that India is standing on the brink of a 4G revolution!