OurMine is back to its old tricks and this time it played mischief with the Twitter handles of Netflix’s US account and the associated accounts of Marvel Entertainment.

The hacking team posted a message on Netflix’s Twitter account saying, “Hey, it’s OurMine, Don’t worry we are just testing your security, contact us to tell you more about that contactourmineteam@gmail.com.” The group posted a similar message on the Twitter accounts of Marvel Entertainment and Captain America as well.

Soon after OurMine posted the message, Marvel took control of its Twitter account and deleted all the related tweets. Though we were able to get hold of the message posted by the hacker, thanks to the screenshots captured by the Twitterati. 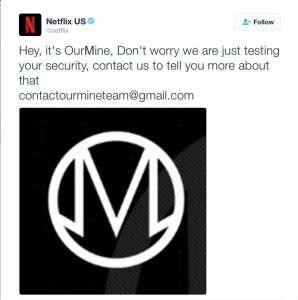 Earlier in October this year, BuzzFeed.com reported that OurMine had hacked into its system and altered several posts.

ALSO READ: Alert! Here are 10 passwords you should never use again

“The hacking group OurMine on Wednesday altered several posts on BuzzFeed.com after a BuzzFeed News Article reported that a Saudi teenager is most likely behind scores of hacks of tech CEOs and celebrities,” the group had written in a post on Twitter.

ALSO READ: Watch: A hacker exposes how vulnerable flights are to hacking

OurMine is a professional group of hackers that help in finding out security flaws in the passwords of various websites and suggesting a suitable fix. In the past, the group has hacked into the accounts of Facebook founder Mark Zuckerberg, Wikipedia, actress Lisa Schwartz, news website Variety and Wikipedia founder Jimmy Wales, among others.