In the Internet era, friendships foster on Facebook and love is just a four-letter word that is used more often than it is truly meant. At a time when life is happening at a lightening speed and love is limited to fairytales and Bollywood movies, Tinder is offering people a unique chance to find a mate they can share their lives with, and in the process maybe find something that everyone is searching for– a partner for a lifetime.

Juhi was living in Cape Town when a friend secretly installed the Tinder app on her smartphone. One day when she was swiping through the profiles on the app, she came across an interesting bio of a guy called Tapas which read: ‘I stare at tube lights and sometimes, I accidentally wear my T-shirt inside out’. 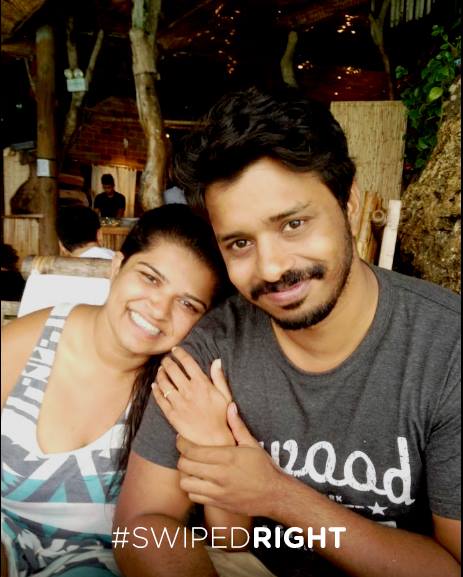 As fate would have it (or in this case Tinder), Tapas swiped too swiped into her profile, which opened the gateways of messaging for the duo on the app. Messages turned into long conversations as the duo began texting on Tinder. However, what served as the deal breaker between the two was the incident when Tapas complimented Juhi on her arm tattoo. “That same night we chatted till 4 am on Tinder,” said Juhi as she shared her telltale Tinder story.

Their first date happened at a microbrewery in the heart of the city, but it wasn’t till the two were a couple of beers down till their conversation actually began. One date led to another and before they knew it they were in love. But what really sealed the deal for Juhi was how her family loved Tapas the moment they met him. They got married soon after.

After they got married, they decided to participate in a Tinder Tripoto contest, which won them a beautiful prize– their honeymoon. “Tinder is the best thing that happened to me! Winning a honeymoon through Tinder is just the ultimate icing on this amazing cake,” she said.

It’s not very often that we find our ‘one true love’ on social media but life is all about taking chances and trying out unconventional things. It goes as Juhi says, “You never know how things work out.”