All of them homo homies out there, you are not alone. Apparently, Grindr is just as miserable for everyone as it is for you. A recent survey has revealed that the gay hook-up app is actually the number one when it comes to making its users unhappy.

Time Well Spent, a tech-based organization, conducted a survey in collaboration with an iOS app Moment, which monitors the time a user spends on each app on their phones. Collecting data from about 200,000 iPhone users, the survey calculated the time each user spent on a certain app feeling “happy” or “unhappy”. And voila! Grindr topped the “unhappy” list.

According to the survey, 77 percent of Grindr users reported feeling miserable after they logged off from the hook-up app. Grindr was followed by the infamous gaming app, Candy Crush Saga, and Facebook at 71 percent and 64 percent unhappy users respectively.

ALSO READ: The story of this man on Grindr saving another from committing suicide will bring a smile to your face 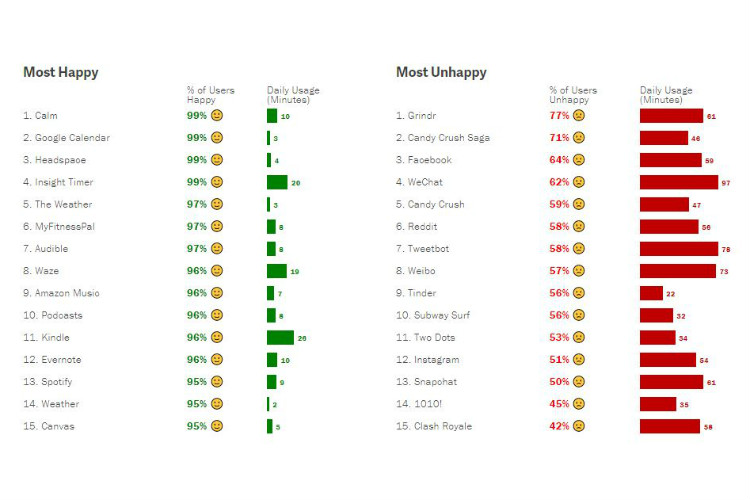 Tinder, with 56 percent unhappy users, was reportedly ranked #9 on the “unhappy” list. Really speaks volumes about our online-dating culture, doesn’t it?

However, all is not lost. According to the survey, on an average, a user’s “unhappy” time was 2.4 times that of their “happy” times, i.e, the more you use it and the more time you spend on an app, the more depressed you get. For example, users who spent around 40 minutes on Netflix were reportedly satisfied with the app, but the users who spent over 80 minutes merely surfing it, reported that they were unhappy, according to the survey.

So, if you want to be rid of that feeling of remorse and general discontent after using Grindr, all you gotta do is reduce the time you spend surfing the app. TBH, there’s no escaping creeps on Grindr so it probably wouldn’t work, but hey! At least it’s worth a shot, right?