The half-marathon race held on October 21 in Delhi almost didn’t happen as many feared that the city will be enveloped in a thick blanket of smog over the weekend. But the organisers employed a novel way to disperse air pollution. In an experimental technique, the organisers used Ultra-High Frequency (UHF) radio waves to clear the air for runners.

The technique included using UHF waves to dispel pollution from particulate matter measuring only 2.5 microns, known as PM2.5, whose small size—about 30 times smaller than a human hair—allows it to lodge deep in the lungs, damaging the respiratory system. The specialized radiofrequency transmitter is developed by Bengaluru-based green technology company Devic Earth.

“It was a great day with clear skies and no pollution-related incidents among our 35,000 runners. We have shown that it works and made a point to tell the authorities.” 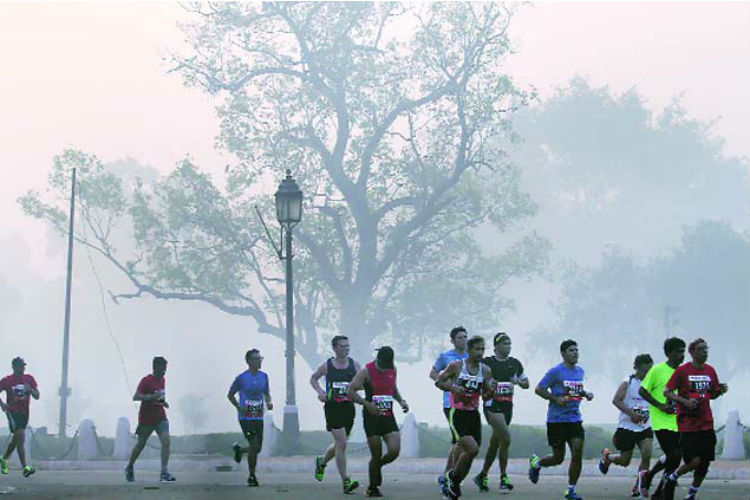 According to Singh, the pollution reduced by as much as 30% during the race. The organisers also tried to dampen down the dust that hangs over the city by dropping water vapour along the course from a height of 20 feet. However, the Air Quality Index was reported showing the air as ‘unhealthy’.

Last year, due to Delhi’s severe air quality, medical experts had urged marathon organisers to cancel the event. In response, the organisers brought forward the race date to October — away from the Diwali festivities that pollute the city.

Home to world’s 10 most polluted cities, India is struggling to reduce pollution in the same way as China did when it was dealing with hazardous levels of air pollution. Governments of Punjab and Haryana have put in measures to mitigate stubble burning, however, most farmers are neither dissuaded by penalties nor lured by subsidies before burning the leftover paddy. And this is already having its effect in Delhi with the Air Quality Index plummeting.

(with inputs from Reuters)