Amid heightened competition by the newbie telecom operator Reliance Jio, telecom giant Bharti Airtel has rolled out a new plan for its broadband users. As a part of the new offer called the ‘Airtel Broadband Big Byte Offer’, the company is offering up to 1,000 GB bonus data in monthly rental plans ranging between Rs 899 to Rs 1,799. This bonus data will be valid until March 31, 2018, and it will come at a speed of up to 40 mbps. However, the bonus data is valid only for ‘online purchase’, the Airtel website stated. Also, the corresponding data plans will vary from region to region.

As per the terms and conditions of the company, the big byte offer is available to all those customers who avail company’s services on or after June 12, 2017. The offer is valid only in India and is redeemable only on taking fresh subscriptions to Airtel’s select DSL broadband rental plan. 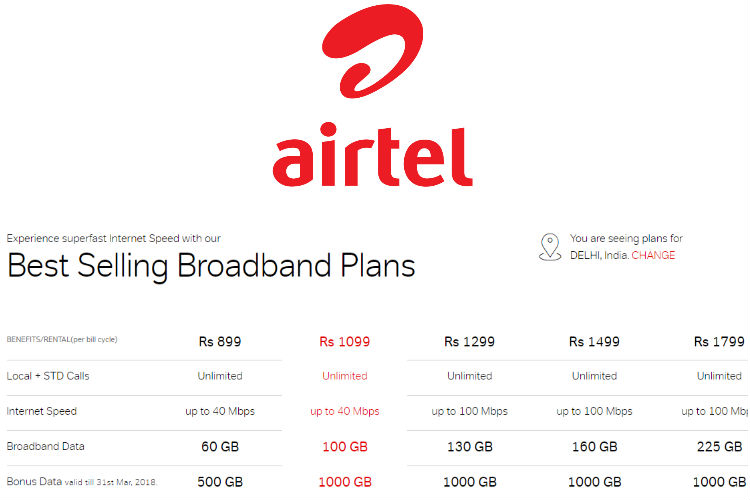 According to the Airtel website, the offer is not valid for special, commercial or enterprise plans and it cannot be combined with any other offer provided by the company. To avail the benefits of the ‘big byte’ offer, interested users will have to visit the broadband page of the Airtel website and select their base plan, enter their mobile number and their address to raise a request for a new broadband connection. The bonus data will be available after a period of 7 days of the activation of the base plan.

ALSO READ: Jio vs Vodafone, Idea, Airtel, BSNL: Find out the best plan for you

ALSO READ: Airtel now lets you carry over left over data to next month