Does the name Abhilash Tomy ring a bell? If not, let Hrithik Roshan’s latest advert for Mountain Dew educate you. And once the education’s complete, we hope it enrages you. Pepsico India’s latest Mountain Dew campaign, titled Risk Takers of India, strangely forgot to seek permission from the hero of their ad – Abhilash – and he is NOT happy about the slip-up.

For those unaware of the back-breaking task Lieutenant Commander of the Indian Navy Abhilash Tomy accomplished, here’s the gist: in 2013, Tomy became the first Indian to have successfully conquered solo circumnavigation in 150 days. He called his trip Sagarparikrama II. If that alone does not blow your mind, consider this – he sailed a boat continuously without a proper break, without having someone to talk to, with storms, sea sickness for company. Couldn’t possible have been pleasant, but then most things worth accomplishing aren’t on principle.

The ad series in question seeks to salute the heroes who do something different, and runs with the tagline ‘Naam Bante Hain Risk Se’. And while the notion is admirable, the ad itself is rather ridiculous. Here is a man who went solo around the world – running purely on adrenaline and sheer determination and the advert wants to credit this feat to a frothy soda drink.

Obviously, Abhilash has lashed out at Mountain Dew: 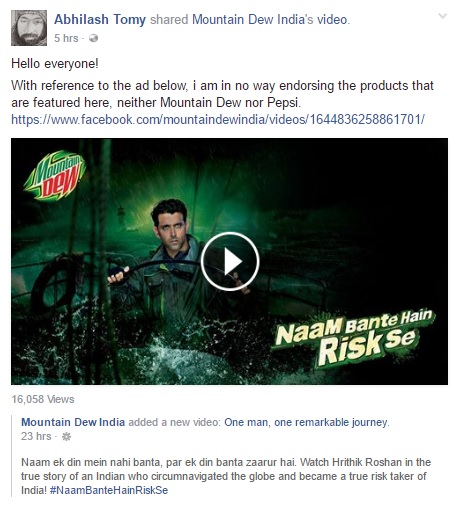 Abhilash has famously spoken about how at one point he didn’t even have drinking water but that didn’t make him stop or slow down. So how does Dew factor in, exactly? He had no water so he drank Dew? Eew.

Don’t get us wrong, we do think the idea of saluting risk-takers is brilliant. But to glorify Dew for the achievement of an extraordinary man is absurd.