Transgender artist, Cass Clemmer, who identifies themselves as a non-binary and queer and prefers using the pronoun ‘they’ has made a really powerful point in order to remove the stigma around periods. At a time, when various organisations around the world are trying to spread awareness about the taboo around menstrual cycle/periods, Cass Clemmer has created a stir online after posting a picture of themselves bleeding in a public park with an equally powerful poem. And with it, they are not just trying to raise awareness about periods but also an issue that many in the world still try hard to overlook as if it doesn’t exist — the LGBTQ community members.

Cass has created an Instagram account ‘Toni The Tampon’ where his sole aim is to talk more and more about menstruation and that even a tampon supports all genders or ‘menstruators’ as Cass terms it. Their aim is to make people realise that it is not just women who bleed or have periods, but even some from the transgender community who bleed, thus breaking the ‘widely acceptable’ gender construct.

Cass is really proactive and keeps posting on Instagram regularly to make their voice heard to people who still refuse to acknowledge the existence of lesbians, gay, bisexual, transgender and queer. But their latest post went viral and people took note of Cass’ message. 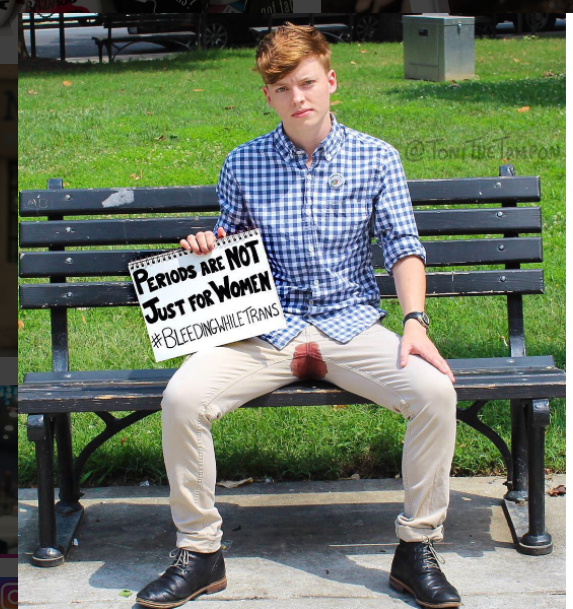 Y’all know I’m trans and queer,
And what that means for me all around,
Is something that’s neither there nor here,
It’s a happy, scary middle ground.
So when I talk gender inclusion,
And I wrote these rhymes to help you see,
I’m not tryna bring up something shallow,
Periods are honestly pretty traumatic for me.
See my life is very clearly marked,
Like a red border cut up a nation,
A time before and a time beyond,
The mark of my first menstruation.
So let me take you back,
To the details that I can still recall,
Of the day I gained my first period,
And the day that I lost it all.
I was 15 and still happy,
Running around, all chest bared and buck,
Climbing trees, digging holes,
And no one gave a single fuck.
I mean I think my ma was worried,
So I went and grew out my locks,
A sign I was normal, still a girl,
A painted neon sign for my gender box.
So, the day I got my period,
My god, a day so proud,
This little andro fucked up kid,
Had been bestowed the straight, cis shroud.
The relief got all meshed up in my pain,
In that moment, I sat down and cried,
Just thanking god I was normal,
While mourning the freedom that had died.
Everyone told me my hips would grow,
I looked at them and couldn’t stop crying,
“What’s wrong with you? You’ll be a woman!”
They kept celebrating a child dying.
See my body had betrayed me,
That red dot, the wax seal,
On a contract left there broken,
A gender identity that wasn’t real.
Most people deal with blood and tissue,
And yet my body forces me to surrender,
Cause every time I get my cycle,
Is another day I shed my gender.
My boobs betray me first,
I feel them stretching out my binder,
I send up questions, “am I cursed?”
And wish to god that she was kinder.
The five days it flows,
I try to breathe, I dissociate,
While my body rips outs parts of me,
Leaving nothing but a shell of hate.
The blood drips from an open wound,
Of a war waging deep inside my corpse,
The battle between mind and body,
Immovable object; unstoppable force. #bleedingwhiletrans #menstruator #genderinclusion #mencanmenstruate #protectranskids #periodpride #genderdysphoria #menstruationmatters #ifmenhadperiods

(Also read : Condom ad talks about something most ads don’t, that women enjoy sex too – Watch)

“I dream of a day when we are able to talk about our periods without being worried about who is overhearing us or feel like we’re discussing something dirty” Cass said in an interview to the Independent.