Potholes lining over 1,500 km of Bengaluru roads have had their share of bad press in the past few months. To highlight the poor maintenance of Bengaluru’s roads, a group of friends took to the streets to conduct a photoshoot for a boutique and the pictures have since gone viral.

The pictures, which have garnered close to 11,000 likes on Instagram in 13 days, shows a model posing in front of different damaged roads of the city. The shoot was conceptualised after Nithin Prakash, a product manager, fell off his bike which had landed in a pothole. He told TOI,

“Despite many complaints over two years, authorities concerned did not care to take action. After I met with an accident, my friends and I came up with the idea of a fashion photoshoot near potholes.”

Prakash teamed up with three of his friends, including the co-owner of Studio Gulaal boutique who provided 15 outfits for the shoot. Neha Shrivastava told TOI,

“We wanted to make the shoot light-hearted. Basically, drawing attention to the issue, while retaining the bright spark. Eventually, we used only 15 outfits for the shoot.” 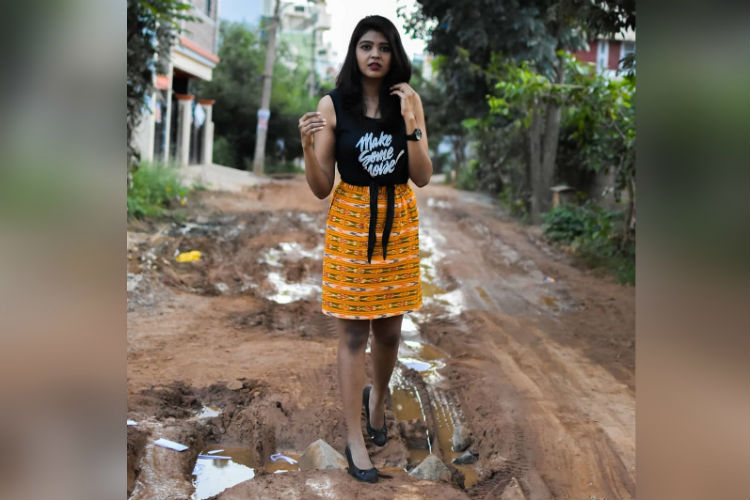 Earlier this year, Bengaluru artist Baadal Nanjundaswamy’s video of an astronaut ‘moonwalking’ over one of the city’s cratered arterial road went viral. Just 24 hours after the video went viral, the city’s civic body — Bruhat Bengaluru Mahanagara Palike (BBMP) filled the pothole. In 2015, the artist created a life-size replica of a crocodile inside a water-filled pothole during the monsoons.

Earlier this year, a video of people fishing from a water-filled pothole went viral, while another thought of attaching a commode to one of the potholes.

The city of potholes

BBMP had recently announced that the city’s roads contained 10,656 potholes which were to be filled by November 10. However, according to some reports, the number is estimated to be as high as 15,000. After the deadline, the civic body claimed that only 742 potholes remained to be filled. The claim evoked strong reactions on Twitter, with many residents posting pictures of cratered roads. The Karnataka High Court also pulled up the civic body for not compensating the victims of accidents caused due to potholes.