While many still argue the existence of ghosts, dismissing them as ol’ grandma’s tales, we often hear people claiming that they have had a one-on-one with the supernatural. More of than not, we dismiss these tales too but deep down, we know that there is a possibility of these horror stories being true because sometime, somewhere, we have all had similar experiences in varying degrees.

Users on the popular question and answer platform Quora shared their real life horror stories and while believing them is up to you, they are certainly bone-chilling, to say the least.

1. A Quora user who lists herself as a Paranormal researcher told the story of an experience that her grandfather had had on the Karkala highway in Karnataka. While driving on a secluded highway late one night, her grandfather and his friend’s family encountered a woman in a white sari with a “nerve-chilling smile and had a ominous vibe”. However, the crew moved ahead and drove right past her. 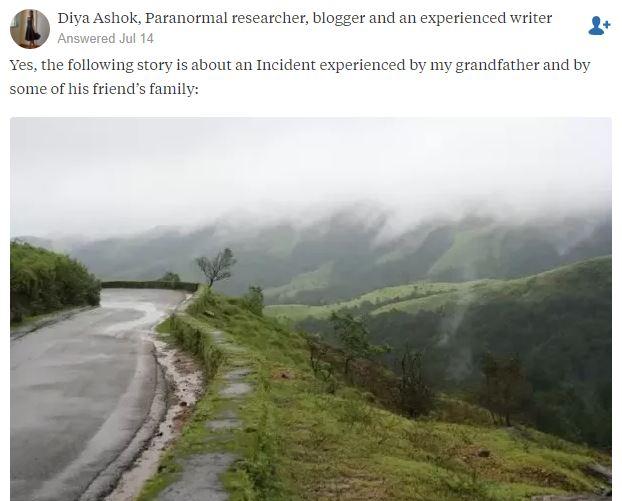 Some 15 km ahead of where they had seen her, the same woman appeared again. They high-tailed it out of there as fast as they could while chanting the Hanuman Chalisa. According to the writer, the highway is prone to such paranormal hauntings. 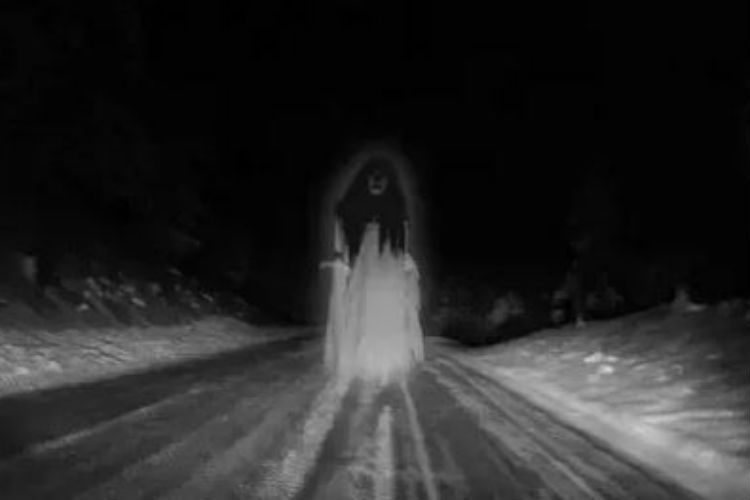 2. Another man had a similar experience while driving a lonesome road at night. The incident is from Jalore, Rajasthan and he had come to visit a friend during the auspicious Navratri. A ‘Devi pooja’ had been organised in a house in their village and as he stated, the woman in the house is “blessed by devi” and gets possessed by the entity post sunset. After the pooja, as he insisted on leaving, the villagers pleaded with him and his friend not to but they called a driver and left at night as they had an early train to catch. 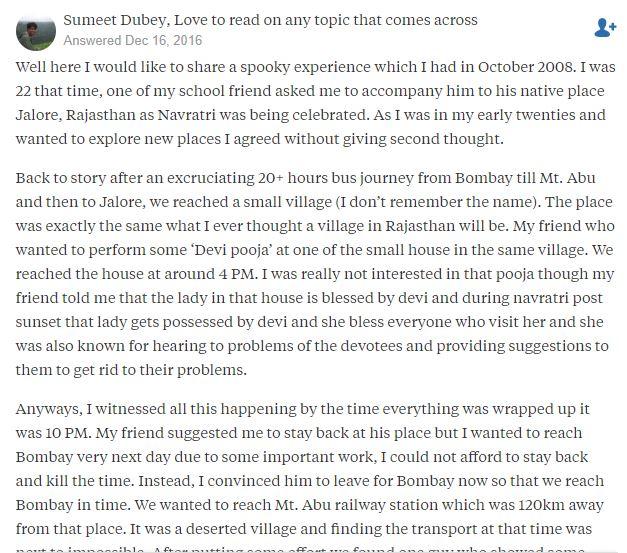 At first, it was nothing but soon he started hearing some sounds and somebody laughing as if in the rear of the car. He got suspicious. “Very next moment I looked at driver that did he also listened that and he was looking at me for the same reason.” As they tried to speed their way through the stretch the sounds got louder and more frequent. “Driver shouted suddenly and asked me to not look back reason to which he said someone has just kept his hand on his shoulder.” Soon, they saw a shape of a man appear in front of their jeep but as soon as the vehicle can near him, he vanished. “This experience still sends chill down my spine. I cannot forget that night,” he writes.

Highways are often the more popular of ghost story settings. But this one Quora user had a supernatural experience in his own house.

3. He had purchased quite a lavish home at a surprisingly low price so they didn’t think twice before taking it. But soon after, there were things moving by themselves and shadows creeping around the house. Until one night when he was woken up from his slumber at night. 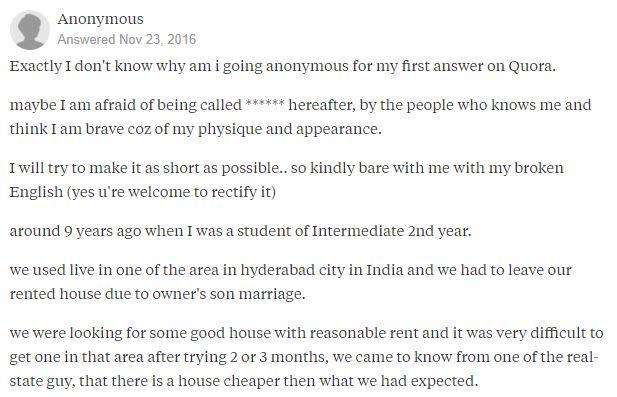 “Around 3:00am I heard someone’s weird laughing when opened my eyes in deep sleep that sound vanished, it was dark and found myself in penthouse and my mind reminded me all the earlier incidents which happened, I was shivering and sweating by fear, suddenly that sound started again and I felt like someone behind my bed sitting on that wooden chair laughing facing my back. I tried to turn my eye balls to see who is there due to fear i couldn’t turn my neck, The only thing I could see that someone with open hair sitting on that chair in the dark.”

The man states that he got so frightened, he wet his pants and stormed out of the room and after several such incidents, the family moved out of the house.

But what’s truly frightening is a shared horror because then you cannot blame it on your mind for playing tricks. You know it’s real and you know it’s daunting.

4. This one Quora user was woken up by a “hazy human figure” at about 2 am one night. She woke up her mother who was sleeping next to her and she assumed the figure to be a thief (scary nonetheless). Hearing their screams, the other members of the family ran towards the room as the “theif” exited but the figure just vanished into thin air as if it was never there! Needless to say, they moved out of that creepy house. 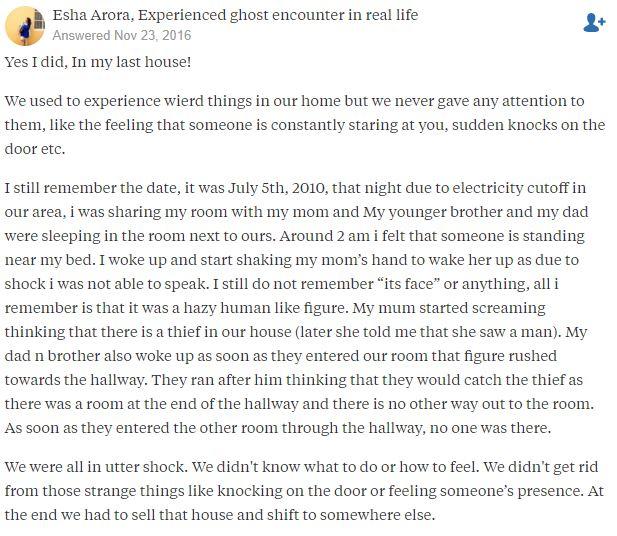 Again, believing in their stories or not, it is all up to you. But if you have any such real life horror stories of your own, feel free to comment them below.