In one of the most popular episodes of Friends, Joey tells Phoebe that there are no selfless good deeds. Behind our good deeds is our own selfishness that our good karma would benefit us. By the end of the episode, Joey is able to prove to Pheobe that indeed there is nothing like selfless kindness. Perhaps that’s true. Acts like distributing food on birthdays or distributing

Acts like distributing food on birthdays or distributing blankets to the homeless, as noble as they are, somewhere down the line we do it to feel good about ourselves or to thank god for giving us enough that we are able to help the needy and poor. That’s charity. We don’t sacrifice anything, just share a tiny bit of our fortune to the needy.

But then there are people who change our idea about charity completely. Who are so selfless in their deed that we are bound to believe indeed selfless kindness exists. That’s what we call humanity.

One such person is Sakhi John, a professor of management studies at Jamia Hamdard University in Delhi. This is his incredible story.

He travelled over 2,500 km to meet Shaju Paul, who cleans passenger buses and is a man of meager means. The He works as a bus-cleaner and lives on a small patch of land in a village in Kerala’s Thrissur.  His meeting with John would change his life. He has been looking for a kidney donor after doctors declared that his kidneys were damaged. As the only breadwinner in the family, he was in desperate need for both money for the transplant and a donor.

Luckily for him, his village  “samiti” collected Rs 22 lakh to fund his transplant. But even as the money was taken care of, Paul found no donors. Three will donors came and went back because of the extensive paperwork involved in organ donations. The Indian Express quoted him as saying:

“When I came to know that both my kidneys were damaged, I was shattered. I was the sole breadwinner of my family… my wife Shibi and children Alwin and Angel. But then, Sakhi came like an angel with the gift of life.”

And then came John who was ready to endure endless paperwork, travel to and fro and miss his classes back in Delhi. John’s family is worried about the health implications of the transplant. He has had to undergo 375 medical tests and several rounds of government offices in Kerala. Time and again he had to prove that he was doing this for monetary gain. But 45-year old John is determined to go ahead with his decision. Since Paul was not educated, John offered help Paul to fill up his applications. A mind numbing 52 forms had to be filled and 32 documents submitted. 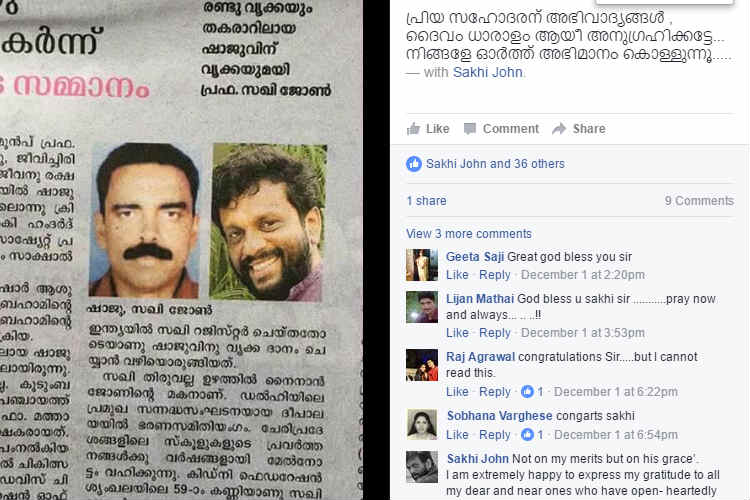 (A snapshot from the local media’s coverage of the story. In picture from left: John and Paul)

What inspired John to make this supreme sacrifice?

John is also a social worker and having seen how his father’s donated eyes lit up someone’s life, he was determined to follow the good path of organ donation himself. His only condition was that the person should be from an economically weaker section.

“In 2011, after my father’s eyes were donated after his death, I met the ophthalmologist who had conducted the transplants on two recipients. He told me how they could see the world again because of my father. That was when I thought of donating my organs,” says John, who originally hails from Thiruvalla in Kerala.

So when John met Paul his obvious reaction was:

“You are the light in the darkest moment of my life.”

To this Paul replied:

“We follow the religion of humanity, we are brothers.”

Paul has undergone 98 sessions of dialysis. But his ordeal will come to an end before this year ends. Doctors say that John’s and Paul have 95 per cent compatibility in terms of organs donation. So the chances of Paul living a normal life is very high. dialysis sessions.  December 21 is the chosen day when John will travel to Lakeshore Hospital in Kochi to donate his kidneys to Paul.