Spending over a decade in school, students encounter several different kinds of teachers- from the ones who are totally chill to the ones who are lousy as hell and are basically useless. Every teacher uses a different approach to help their students. But it is the ones who go out of their way to help students not just academically, but also, in their personal lives. Teachers like them help turn our lives around and always remain with us, even after school is long left behind.

People on Quora held a discussion on teachers who “saved their lives” and the replies were pretty appalling. From helping students recover from testing personal trauma to literally saving their lives, these teachers certainly deserve some extra credit for redefining the role of a mentor. But they’ll probably be happy keeping that “Best Teacher Ever” mug on their desk too.

This one student was majorly depressed and during the Sophomore year of her schooling, she alleges that she was raped. The sexual assault led to a pregnancy which was followed by a miscarriage. The ordeal left her worse than she ever was and with her mother not being able to help, she turned to alcohol and drug abuse. “My motto at the time was ‘Anything to kill the pain.’,” she writes. However, during a class, when she had a breakdown, it was her supposedly strict English teacher Mrs Deborah Scarlett who became her confidant and pushed her to do better. She told her, “You are very bright, you have an amazing future ahead of you. You can do anything you set your mind to. Don’t let your past hold you back from your future. Even if no one else believes in you, I do.” Not only did Mrs Scarlett help her hit straight As, she even helped her quit drugs. 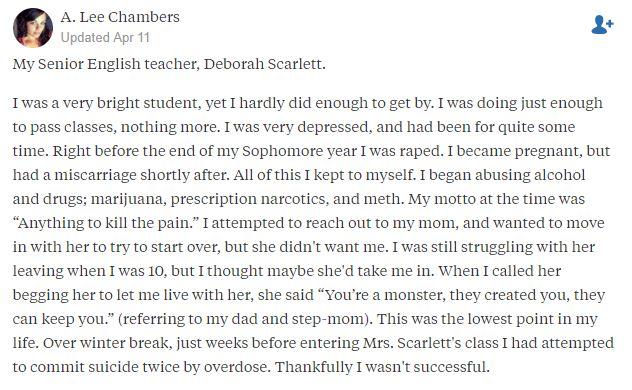 Another student talked about her literature teacher ‘Mrs T’, who helped fill void left by her absentee mother. Mrs T noticed that her student had a knack for literature and helped her with books where she would find solutions to her personal problems. She gave her the time and attention her mother failed to provide her with and now, even after years, she and Mrs T are still friends and she always has her back. 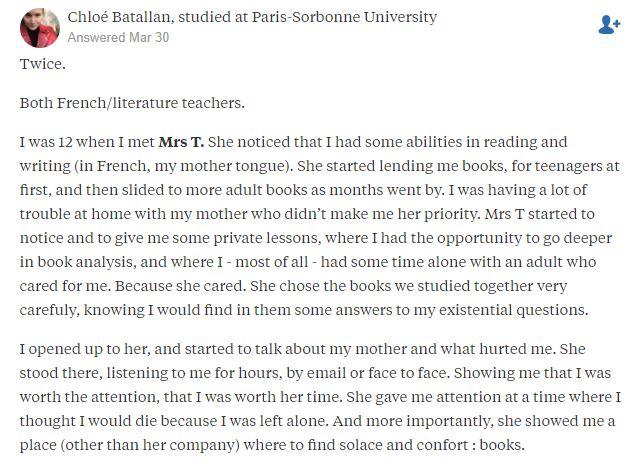 Another teenaged student had her life saved by a teacher. According to her, the teacher in question was her Math teacher in high school, with whom he was also “in love with”. However, when the group was out on a Chess tournament, the student made the huge mistake of tagging along with a drunk man. However, before anything worse happened, she contacted her teacher, who then tracked her down and saved her life. “I was dazzled. ‘Did my math teacher turn into a bodyguard?’,” she writes. 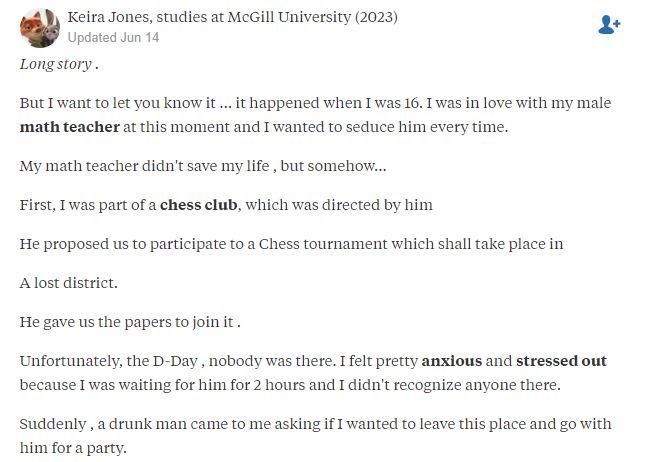 Bullies are always around, wherever you go. And teachers hardly ever manage to reach out to students who are being bullied. However, this one student’s teacher protected her from the bully, for good. As per the student, she felt that the bully had “planned on doing something a lot worse” than just teasing her. In the nick of time, her Math teacher arrived and kept her safe. Later on, he managed to get the bully expelled from school. 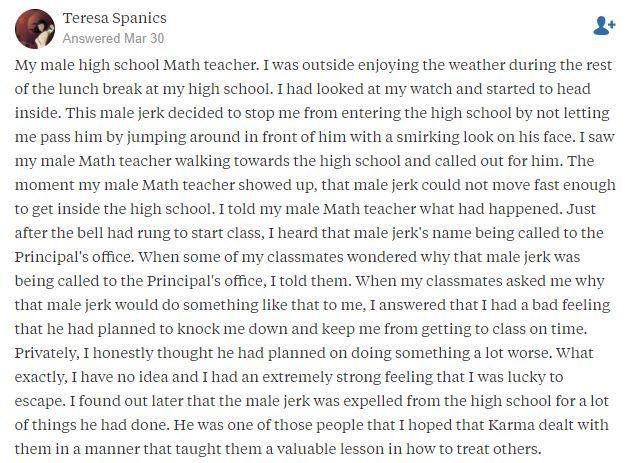