It’s only a couple of days to Valentine’s Day and most of us still don’t have our dates in place. I know I don’t. Well, if you’re like me, i.e., single and desperate AF, we have just the thing for you.

A Facebook user named Shakul Gupta has generously offered his services as a boyfriend, charging a rental fee in exchange. The 26-year-old posted an advertisement (?) on Facebook listing four different boyfriend packages (not what you’re thinking) as per your interests.

TBH, Package 1 — holding hands and putting his arm around the shoulders — is just hella sad.

ALSO READ: Worried about roadside Romeos on Valentine’s Day? These boys have a hilarious solution 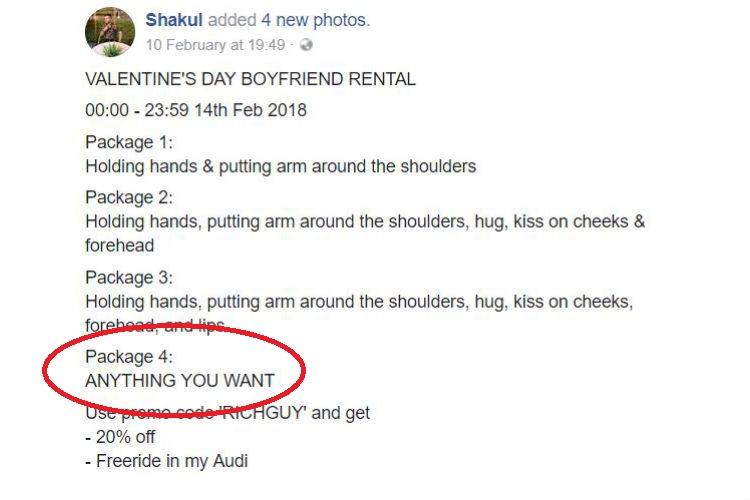 He’s also willing to try on different personas for you, including Christian Grey. #JustSaying

Although, yeah! His services kinda end just before midnight on Valentine’s Day, so from thereupon, you’re on your own.

ALSO READ: 7 kickass things to do if you are single on Valentine’s Day

Which makes it weird that he mentioned that your family and friends will love him since he’s not sticking around post Valentine’s, but yeah… Good to know!

Shakul, however, mentions that he wouldn’t defend you from cockroaches, eat seafood, or engage in any fashion or beauty talk.

Shakul also mentions he’s a Sagittarius so, if you don’t believe in astrology, tarot or some other pseudoscience, this is your cue to exit.

But if you are willing to sign up still, do not forget to use the ‘RICHGUY’ coupon code for a 20 percent discount and a free ride in his Audi. Check out his full post below: