Stand up comic artist and AIB (All India Bakchod) writer, Supriya Joshi who has entertained the masses, especially youngsters with those brilliant writing skills for all those  hilarious AIB videos took to social media to shut up those trolling for being fat. Supriya was being tagged in fat-shaming memes on social media and she spotted it. In a fitting response to those memes, she tagged one of those body-shamers and in a series of tweets brilliantly explained what is wrong with the meme. The meme which was circulating on Twitter also had AIB’s Tanmay Bhat, stand-up comedian Bharti Singh and television celebrity, Dolly Bindra. Supriya who noticed the meme on Twitter, decided not to take it all lying down.

In a series of 14 tweets Supriya explained how it was not at all funny to call someone fat because they already know it. Supriya also asked them to be a little more creative with their memes, if they want to make them. In what can be called as the most epic response, Supriya also told her body shamers that she will not to stay quiet about it, and will not let them (the haters) win.

Here are her tweets and the meme labelled as ‘Fatty family’ in which Supriya, Tanmay Bhat, Bharti Singh and Dolly Bindra were tagged:

Hi guys, want to take a quick moment to address these memes I have been getting tagged on recently. https://t.co/nBGBouCTOC 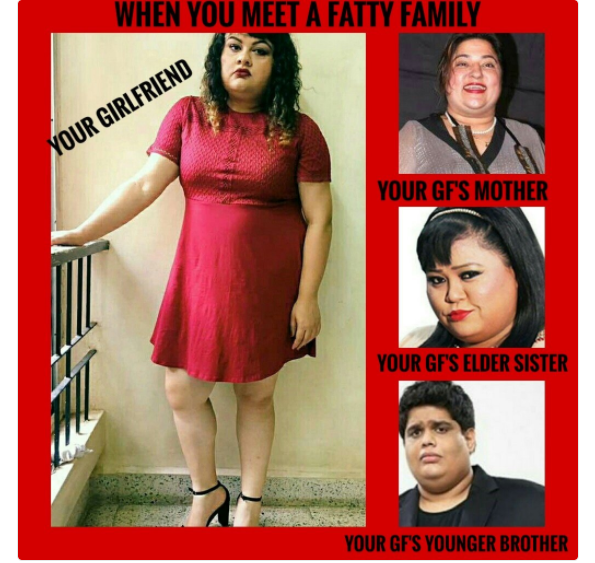 Traditionally, fat women like myself have served as the punchline for almost every joke imaginable.

Media has dictated that a body like mine is not a normal body, therefore it is hideous and demands to be made fun of.

Because that’s what you do with things you don’t understand – you either respond with hate, or you respond by making fun of them.

Another additional layer (pardon the pun) to this is that along with being fat, I am also a woman.

So the jokes and the hate towards me will always be x100 than what a fat guy will receive. I see this every single day.

(Also read: Mother, daughter duo talk about sex, but in a way the Censor Board would approve – Watch)

All of which are basically saying, “Hey, how are you doing these things, you’re fat, remember? Haha shut up fatty!”

But I will not shut up. I will still put myself out there. Because if I shut up and hide, I will let the haters win.

It has taken me a lifetime to love my body, and I will not let the small mindedness of a few misguided people take that away from me.

So yeah, please go on, make those memes, call me names.

But for heaven’s sake at least be creative about it.

Calling me fat is not funny, you’re literally telling me what I look like. I have a mirror. I see it every day and love who I’m seeing in it

The only way to normalise all the unique body types that exist is to put yourself out there as much as you can.

Before I end this thread, I just want to say something I say at the end of every Insta live I do: You are beautiful & have no physical flaws

Please continue to love yourself and others around you.

Supriya realised soon, it wasn’t over and there was a raging debate over her being obese and the need to lose weight for the sake of her health which she ended with saying:

And also, losing weight is not the solution to ending the hate towards bigger bodies. You’ll still call us names, different names, but still