Dickens could never have known that the opening line from his cult classic, The Tale of Two Cities, could one day summarize the world’s largest democracy. What was satire for his times, is basically reality for ours. It is truly the best of times, as it is the worst of times. We are finally talking about everything we’d swept under the rug for long – and on the flip side, everything that once threatened to topple over democracy in a secular nation has made a comeback with a vengeance.

At the forefront of this set up in the world of TV journalism is Arnab Goswami, the man whose debates is turning India deaf. At least it was till he quit. After quitting Times Now, the Angry Middle Aged Man of Indian television announced the launch of a  ‘nationalistic’ news channel, Republic. And then promptly took a long hiatus. Sadly however, the break did not last for long and the Man Who Yells is back, looking down upon the mango people from massive hoarding set up across metropolitan cities, announcing his return.

First, there were hoardings which said ‘Arnab With You Soon’, which soon got trolled by India Today’s equally weird hoarding by its side which said ‘Anjana Reached And Waiting’. 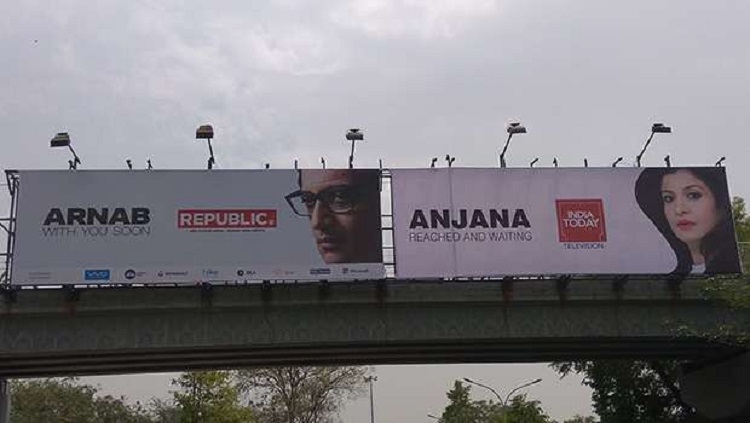 Which brings to mind a very important question: Are these hoarding not being proofed? No budget or no sense of grammar?  What is the issue here?

The second hoarding appeared last weekend, bearing an even more unfortunate epithet: ‘Pakistan’s Migraine’ with a profile of Arnab Goswami.

@BabaGlocal @republic ‘Pain in the ass’ is too mild a term for that fellow.

India’s boil on the bottom.

@scotchism How is he Pakistan’s migraine when noone even knows of his existence here?

Ooh I come to know today Goswami is a main germ behind migraine & now I can believe it’s uncurable https://t.co/RdC8NJDdSb

Much obsession. So lame. Its almost as if they have nothing better to do or think about pic.twitter.com/rf9e1ssQhu

If Arnab Goswami things he can be Pakistan’s migraine sitting in a TV studio, this is the heights of idiocy a media outlet can reach https://t.co/mypimQsZM1