Although, Bollywood continues to rule the hearts and mind of the young and old alike, only a few in the industry understand the responsibility that comes with entertainment. And, by a few we mean only a handful.

What sells in the name of entertainment, creativity and innovative content is far from anything it proposes. So, one of the Quora users posted a question ‘What are the worst things about Bollywood?’ and people had a lot to say, so much so that the thread was almost endless. Not to anyone’s surprise, there were more than one or two things that were ‘worse’ about Bollywood. With more than 100+ answers, it seems these observant and critical Quora users made it quite clear as to what all is wrong with our Hindi movie industry.

Here is a list of everything that is wrong with Bollywood, according to Quora users:

For the starters, let’s start with the issue which forced a lot of big Bollywood celebrities to stay quiet and not speak up and that explained a lot. When actress Kangana Ranaut openly accused the industry of promoting nepotism and favouring star kids over much-talented ‘outsiders’ (who are from not from the industry). 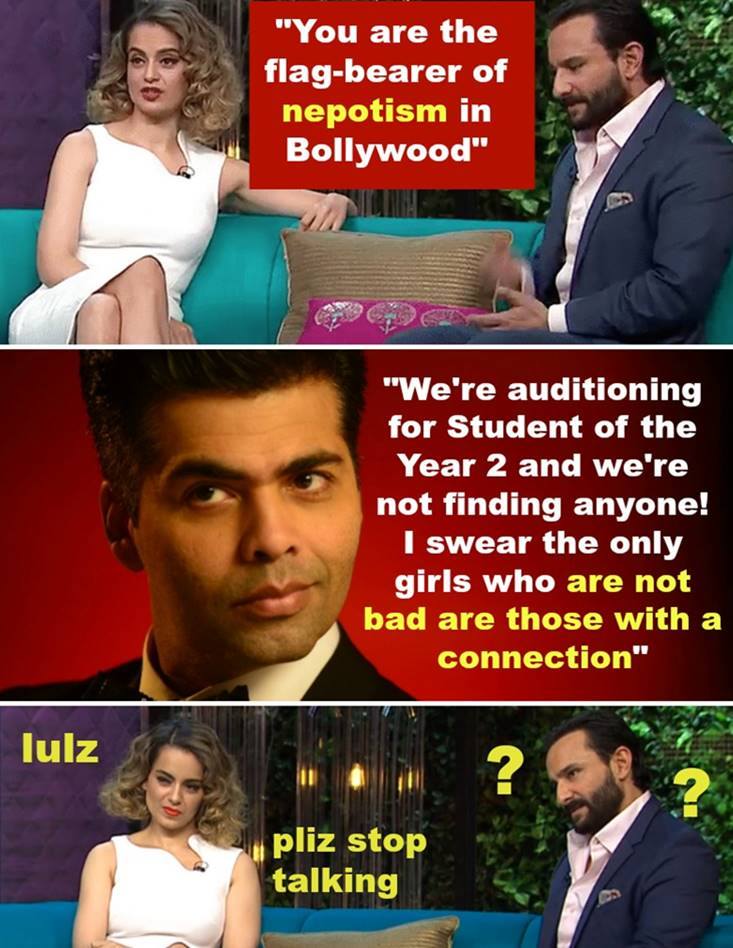 As one of the Quora users is almost ruthless in pointing out, “…Who are the most sought after young actors currently? Varun Dhawan, Shraddha Kapoor, Arjun Kapoor, Sonam Kapoor, Sonakshi Sinha, Alia Bhatt? With the exception of the last name, none of them can act to save their lives.”

There is another one who doesn’t mince words:

There are two sides of Bollywood. One side we have highly learned and talented actor and actresses. Other side we have Baap Ka Naam & contacts. People who studied acting, directing from the reputed institutes like National School of Drama(NSD) and Film and Television Institute of India(FTII) are almost legends… Still the mass hysteria for certain Bollywood stars and production house monopolies preventing great artists to enter the main stream films.

And one of them even backs his argument with a solid example and cites the example of Kareena Kapoor. Kareena who made a debut in 2000 along with Abhishek Bachchan in Refugee delivered a series of flops  before finally coming up with a hit Jab We Met in 2007. Quora user writes “… Had it been a commoner(with no influential boyfriend/girlfriend or godfather/godmother) , he/she would have been written off from Bollywood much earlier.”

At the behest of serving entertainment in form of item number and sometimes, comedy, Bollywood has been objectifying female body with utter disregard and shamelessness. And the Quora users were considerate enough to point that out.

“Is it necessary for the heroine to strip down to a bikini just to dance? Item songs of yesteryear were never this raunchy. They were loved because they were good (Chamma chamma) not because the item girl was practically naked.”

The recent controversy about Central Board of Film Certification regarding Lipstick Under My Burkha not getting clearance because the movie was ‘female oriented’ and had problematic sexual scenes, audio pornography and abusive words’ was also cited by one of the users, comparing it with the clearance of Great Grand Masti, Mastizade and Kya Kool Hain Hum 3.

“Are we trying to pretend that women do not have sexual feelings? And even if The Board has some problem with that, are they telling the filmmakers that even fiction cannot depict that? However, I believe The Board does consider the following movies to be accurate depictions of women in real life, since none of them had problems getting certified.” 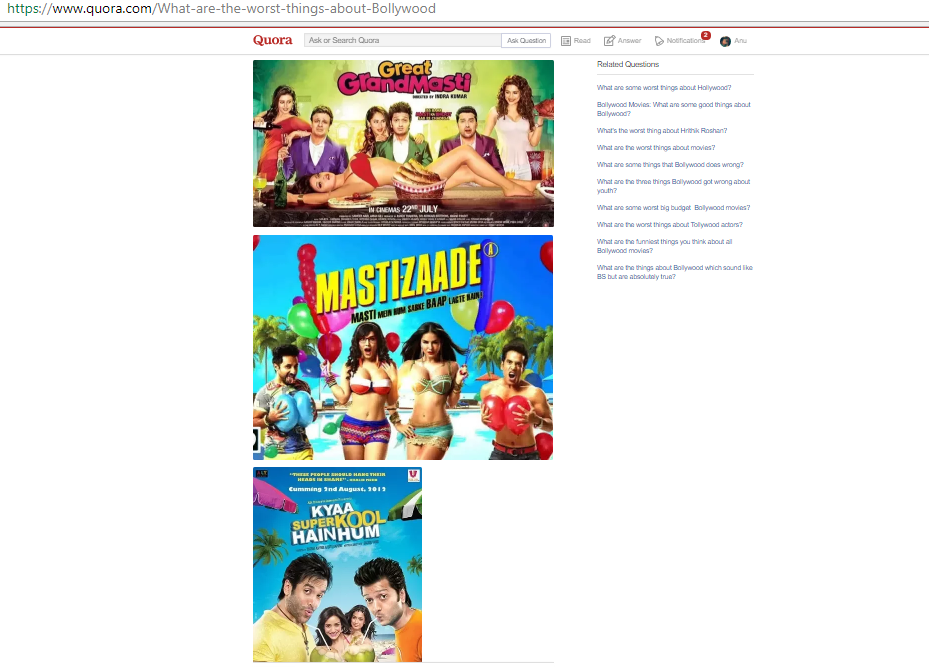 (Also read: As Pahlaj Nihalani fights over ‘intercourse’, a look at 11 Bollywood dialogues nobody objected to)

Like elsewhere, Bollywood is also infamous for sexism and there is a proof of it. There’s a huge pay disparity when it comes to male and female actors in Bollywood. All the male lead actors are paid multiple times more amount than the lead actresses. Even after the success of Queen and Tanu Weds Manu Returns, Kangana Ranaut gets Rs 11 crore whereas actors like Shah Rukh Khan (has he seen Fan?), Aamir Khan and Salman Khan (cough *Prem Ratan Dhan Payo* cough) charge Rs 40 -60 crore per movie.

As a Quora user, Ravi Khatri citing example of Salman Khan’s Sultan, “…Salman Khan starred Sultan had earned 100 crores on Box Office but Anushka Sharma has got merely 6 crores for the film.” 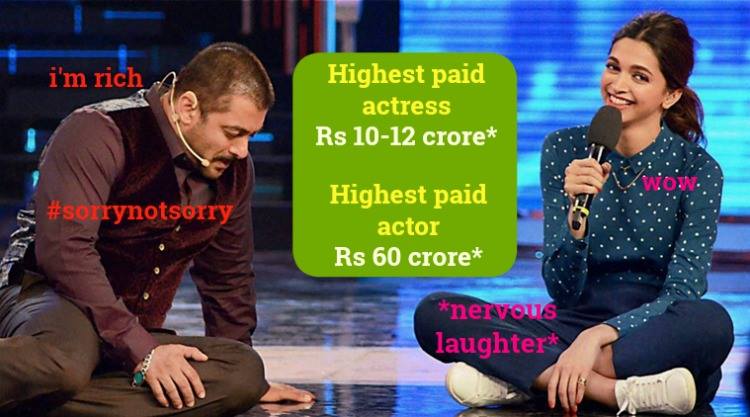 Convinced? We are! Tell us what you think in the comment section below.

(Click on the link to read the entire thread: What are the worst things about Bollywood?)