Mona Haydar went viral with just one song which was known for creating waves on social media as these Hijabi women decided to celebrate Muslim women. The song Hijabi (Wrap My Hijab) had caused a stir in the Muslim community.  Mona who is from from Flint, Michigan, felt that their community and more importantly her identity as a Muslim American had not been represented well and decided to speak out on Islamophobia. And with Mona’s first step into the rap world, it was inevitable that some feathers would be ruffled. Now, three months later, Mona has another song for the world

In her signature direct style, Mona calls out to the people: “If you think this song is about you / I don’t know what to tell you.” The video features Orange is the New Black’s Jackie Cruz and has Mona talking about the well oiled machinery, that is the institution of patriarchy.

The words of the song are calling out the male abuse of power, especially in the Muslim communities.

Mona managed to tread on turbulent waters, where few have gone before. She talks about 1 in 3 women in the world are dealing with abuse and she refuses to watch silently from the sides.

And then Twitter plunged in. Some praised Mona for defying the norms

Mona is back! First she tears down Islamophobia and now she’s taking on sexism! An icon __ https://t.co/OvenWCbGlH

@mona_haydar What you are creating space for is so important Mona. And you are doing it SO well! ___ Proud to be a fellow Arab feminist!

MONA HAYDAR IS A LEGEND

And there are those who found her funny:

Lmaoaoao I just came across mona haydar __ she funny____

And those who hated her for it

I think this video sucked for way more reasons than just cultural appropriation & the lack of black representation https://t.co/6Hq1FUrhBA

The author does have a point. The quality of Mona’s rap is even worse than Vanilla Ice’ rap songs.

Then dance right out of America. You move to America you embrace our Culture we do not change to yours

To people accusing her of culture theft

Mona this is where you get it twisted. The music you make is NOT YOURS. #culturaltheft

And then some people were unhappy with her choosing music, despite being a Muslim. Others argued that where was the viral love for other colored voices like Miss Undastood, comparing Mona to them and stating that she couldn’t rap even if her life depended on it. 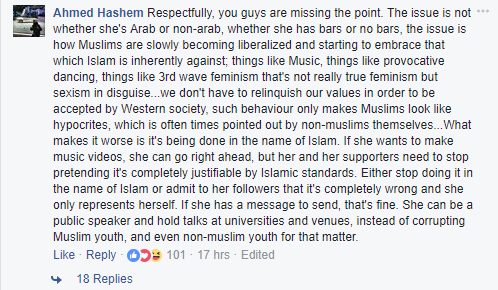 Also Read: This guy’s Snapchat breakup rant comes in the form of the most hilarious puns

But no matter what you think, the rap is not a laundry list of complaints, but an anthem. Something all women can sing to themselves (because patriarchy is listening) on a rainy day.