There’s no denying that the idea of gender equity is lost on some people. However, some people really exceed your expectations when it comes to being sexist. This one user on Quora posted a question asking if he did anything wrong by declining his fiancée’s request to share household chores. However, it shouldn’t be much of a surprise since the sexist notion that women are meant for household work still prevails. Well, objectively, it has more to do with entitlement than sexism. But, growing up watching women in the family being pushed into houeshold work while men steer clear of it has shaped people such as this man.

“Why should a husband share household chores if his wife doesn’t earn even half of his salary and is working just to pass the time,” wrote the Quoran. In the description, the man added that he earns 20 lpa while his wife earns 4.5 lpa. “She expects me to help her in household chores,” he wrote. “I frankly told her that please marry a guy who earns 4.5 Lpa, he will do whatever you demand.” At least the man had the courtesy to ask whether he was wrong after what we assume must have led to a fight. 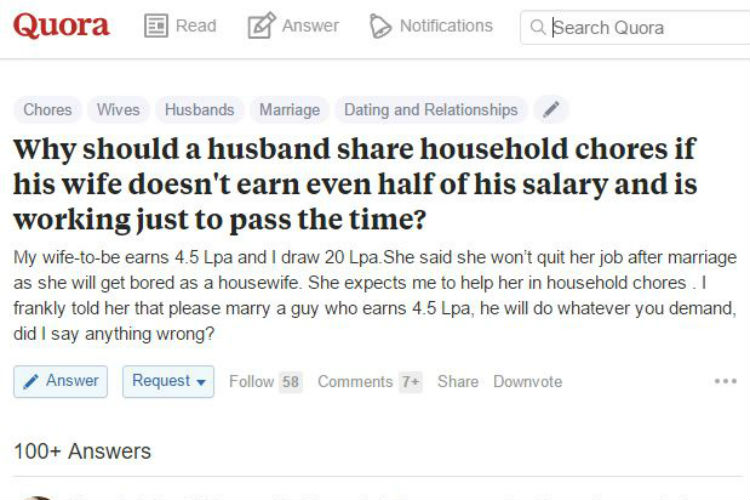 “You are making your marriage sound like a work contract.”

Anyway, fellow Quorans didn’t let him be, OBVIOUSLY. His sexist remarks in response to his fiancée’s request received a lot of backlash. One Quora user wrote, “If I work two hours a day as a freelance consultant for 2000 euros an hour and my wife earns 1000 euros a month working 12 hour shifts should she do the household chores because she’s POOR?” Another stated, “Earning more doesn’t entitle you for anything when it comes to relationship.”

Here is the entire thread.