Ever since the women of Hollywood decided to stand up against Harvey Weinstein’s numerous accounts of sexual assault, women across the world have been forthcoming with their own stories. Amid all the countless #MeToo social media posts which reflect on the horrors of abuse in our world, there was one case that came to light in High Spirits Cafe in Pune. Several people on the internet have now come out to speak about the abundant misdeeds of the owner, Khodu Irani. Our very own Harvey?

While most people were pretty taken aback by the fact the several women had faced sexual harassment in the same place, which even “gives awards for best breasts”, there was this one who made light of the incident with a joke. Guess we also have our very own James Corden too. Anyway, the man posted a Facebook status saying, “I’d love it if a group of women harassed me. Does High Spirits offer that as well?”

As outrageous as the status is, some of the comments seemed quite appreciative of the joke. 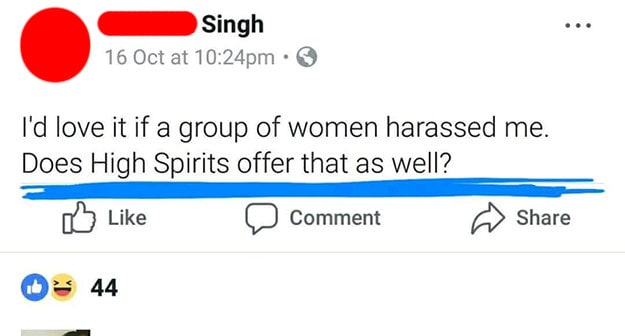 While there were several people calling out the joke for what it is (atrocious), silence reigned supreme after one comment categorically shut him down – a comment from his mother. Seeing her son’s tasteless joke on a very serious concern, the mother couldn’t help but leave a lengthy note for him, schooling him on why harassment is nothing to joke about.

“I am really proud of you but I will never support you in such jokes,” she stated.

“Harassment is something that every woman has been through and even I have been through it at some point of time in my life. You very well know that I am a political student and instead of handling a ward or constituency I was given a kitchen to handle. But that was in 1994. I am very proud of the women on your post who openly speak up against you which I couldn’t and no woman like me could. Even I am very offended by your post and I won’t serve you any food for the rest of the month. I wanted to talk to you about it in person but since you like writing about everything on Facebook I thought I should answer you here.”

What’s even more brutal is how she ended her comment. She wrote, “And before you go complaining to your father about me I want to thank him for helping me write this.” Dayum! That is some sick burn. The mom’s reply actually pulled an apology out of the son who later even deleted his original post. 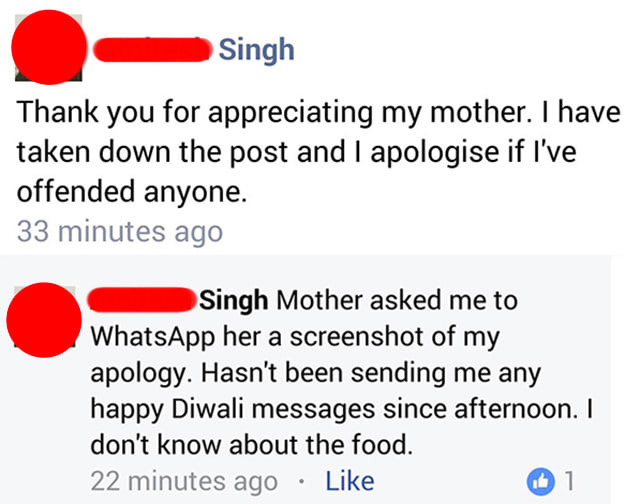 The mother’s comment went viral online and several people appreciated her decision to admonish him online. 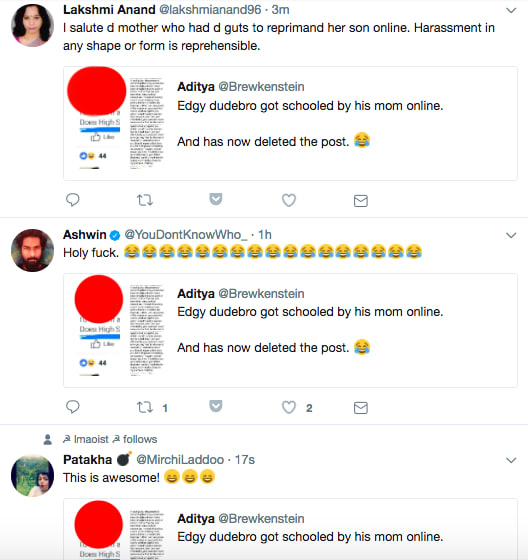 If every mother decides to parent her son like she has, this whole problem goes away, amirite?