In a world where honour killings are real and fathers try to control their daughters, we still see Feminism as a scary concept that’s ‘spoiling’ our girls and weakening our traditional values (of patriarchy). Parenting isn’t an easy task, no doubt, but how about trying to do it right? Fathers laying out rules specially for their daughters is nothing new, but a father laying out rules for guys who want to date his daughter(s) is. Disagree? Well, you have to see this photo to realise just why this isn’t something you’ve seen before. Jeff Warren Welch, a father of two daughters, did. He posted a message on social media for the guys who will date his daughters with a description, ‘I ain’t raising no princesses’.

Not that raising a princess is wrong. If your daughter wants to be a princess then sure why not. Jeff’s explanation here is that he isn’t subscribing to the stereotype that daughter are like princesses (who in popular fairytales, often need a prince to save them). A big nope to that. This dad is clear that his daughters need no saving.

Jeff’s post soon went viral with people praising him for is way of parenting, though there were definitely one who labelled him ‘a weak man high on communist propaganda, ready to destroy his family.’ Eh, where did that come from?

Jeff’s message made it pretty clear that his daughters aren’t helpless women who need their dad to dictate rules to them and protect them. One line in particular was the icing on the cake “You’ll respect them and if you don’t, I promise they won’t (sic) need my help putting you back in your place.” Surely, we need more dads like him. 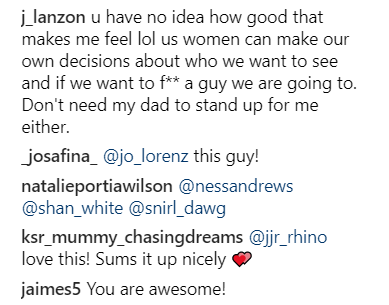 What are your thoughts about it? Share in the comments section below.