Lord Ram, Ram Mandir, cows, cowshed (Gaushala), cow protectors (Gau-Rakshaks), nationalism these are the words Indians are able to identify with most at the moment. UnErase Poetry has posted yet another gem, with poet Gaurav Tripathi penning rhymes that hit hard. He talks about how Lord Ram has been dragged to Court, battling it out year after year. The poem succinctly captures the mood of the nation and depicts the irony of today’s India when the entire Indian population has been polarised and pitted against each other.

Gaurav Tripathi’s words like ‘Ram bole main Hindu Muslim dono ke hi saath hu/Main hi Allah, main hi Nanak, main hi Ayodhya-nath hu‘ (Ram said I am with both Hindus and Muslims/Allah, Nanak and Ram are all but one God) hit the right chord with the masses which remember and which have witnessed the riots that have ensued every time politicians have tried to play the religion card. 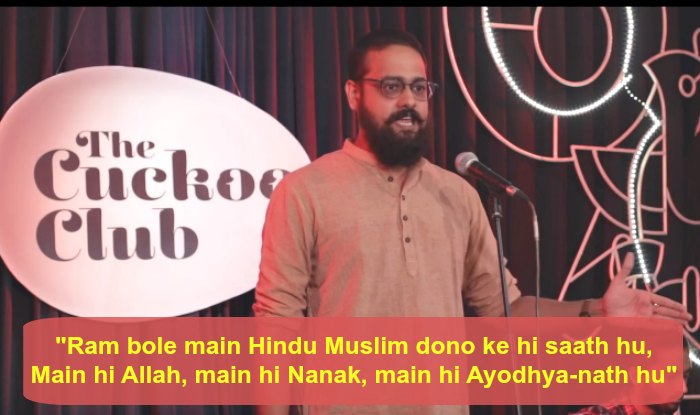 As Gaurav Tripathi’s poem progresses, Lord Ram almost laments at the fact that how his birth as an incarnation of Lord Vishnu was a waste. Why does Ram think so isn’t hard to guess because that’s what Indian politics feeds on but Gaurav’s words will give you goose-bumps. Gaurav doesn’t forget to weave in the issue of Kashmiri Pandits in his poem.

The best thing about the video is how Gaurav has presented the ironical truth of present India in the most honest yet impressive manner. The video posted only a few days ago has garnered more than 18 k views on social media and earned Gaurav Tripathi praise.