Chairman and Managing Director of the Mahindra Group, Anand Mahindra is the rather unexpected Twitter badass everyone needs to follow. With a 4.53 million following on the microblogging site, the 61-year-old is as accomplished at tweeting as he is at conducting business. On April 9, The New York times shared a story on its timeline titled ‘Why Deep Breathing May Keep Us Calm’ with the trailblazing caption: ‘Scientists may have uncovered for the first time why taking deep breaths can be so calming’.

Anybody who is aware of the existence of yoga in general and prayanam in particular will have you know that what ‘researchers at Stanford University’ have discovered ‘for the first time’ in 2017, yogis discovered centuries ago.

Taking this opportunity to deliver a sick burn, Anand Mahindra subtweeting the link with the caption: ‘Really? And no mention of pranayama or Yoga? Does it take Stanford researchers with a lab full of mice to tell you what yogis knew aeons ago?’ 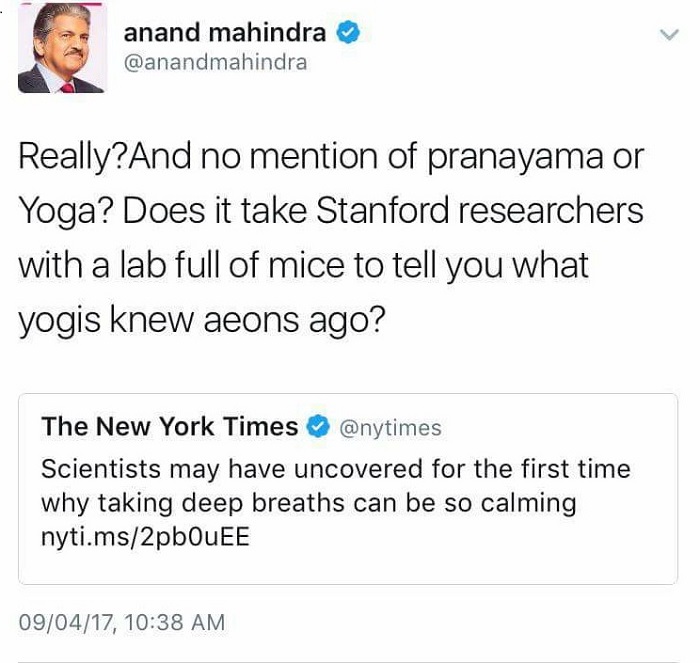 To be fair, the article is not dissing the calming effect of meditation. It is merely discussing the reason WHY breathing deeply can be so calming. The problem is with the usage of the words ‘for the first time’ in the social media pitch which probably confused Mr Mahindra.

@anandmahindra cool down!!….they are explaining WHY does it work…not that it works….and the explanation isnt some weird ‘aatma’,’indriyan’ stuff

@anandmahindra Dear Mr Mahindra, do not jump the gun ! the original paper does contain mention of Pranayama and correctly acknowledges its rightful place pic.twitter.com/tFYSPdmBeX

@anandmahindra West has always done this. They learned from us and taught us the same thing saying they have discovered it with lot of efforts.