If given a chance, most people would probably opt out of cleaning their rooms. Not talking to y’all Monicas out there. Please. Chill. Anyway, the first kind of people… yeah, you. The ones who kick dirty socks under the bed and wash ’em only when you run out of clean ones. There’s no shame in it or anything. A lot of us do that. You can try and hide but it would only take you one hotel room to show your true colours.

It is quite common for people to maintain maximum levels of filth when they hit a hotel room, because who cares about cleanliness when there’s a dedicated maintenance staff? But, some people really go overboard and make life hell for their room attendants. Hotel staffers revealed their sides of the story on Quora and as it turns out, it is not pretty!

This must be quite common but isn’t quite what this one staffer was hoping for, simply because the room belonged to a couple well over 60 years old. Seeing there was no “Do Not Disturb” sign, she calmly proceeded to enter the room and noticed a video camera by the bedside only to find three used condoms on the bed later. Gross! 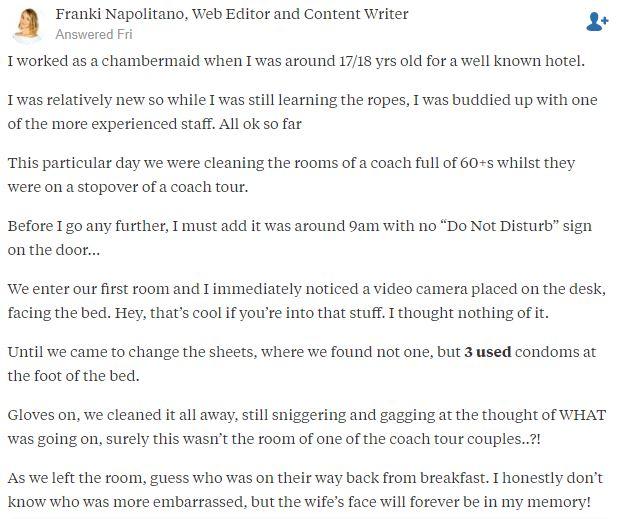 Not a hotel, but still worth a mention. This one Quoran’s friend leased a flat to a bunch of nurses. Well, they’re clean, hygienic… or at least they thought they were. One year later when they left, the apartment was a huge mess. Worst of it all, they had stashed sanitary products under the beds and that left a nice aroma in the room (Yuck!).

People who generally assume that after one has crossed the age of 3-4 years, they would definitely know what to do with their poo. After all, what’s all that potty training for! But ask a hotel cleaning staff about it and they’ll prove you wrong. Like this one dude who ended up cleaning the bathroom floors and walls of a suite which were slathered with faeces. 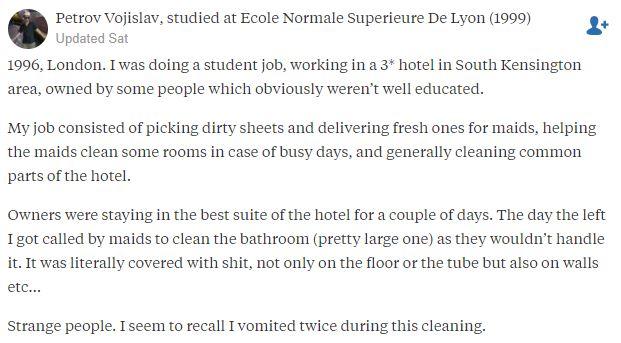 Not really sure how the staffer knows about the backstory, but disgusting nevertheless. Linda here found something similar to the previous incident except, this shitty occurrence was not limited to the bathroom. They didn’t even leave the furnishings and the TV! God!

Bunch of Christian women in their 70s-80s. They sound pretty clean, don’t they? Well, this one woman’s co-worker doesn’t think so. Apparently, she discovered several “personal amusement items” in their drawers after the group had left. Oh Jejus!

Not the kind of stuff you would expect people to leave behind, but this room attendant once found “barely legal” adult magazines and the “biggest tube” of personal lubricant while cleaning out the mini-bars. Also, there was a “stash of an illegal substance”, that would have fetched them quite the moolah, or landed them in big trouble!

Whoever these customers were, they certainly weren’t lazy and that makes them the absolute worst. While cleaning one of the rooms, this woman found it difficult to get into a room as there seemed to have been a chair wedged behind the door. As she forced herself into the room, a bag full of vomit, reeking of beer and hot wings, unloaded on top of her. EWWW!!! 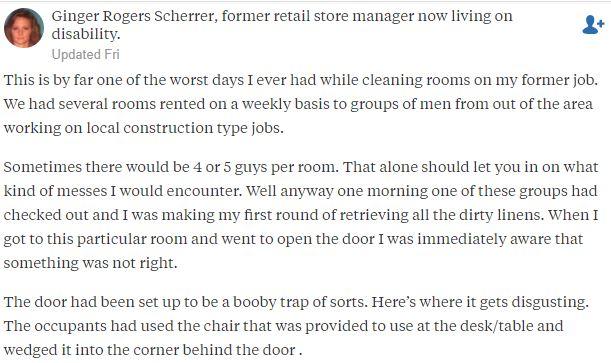 Well, this is something they don’t teach you to handle in hotel management!