Do you want to be remembered for eternity like Elon Musk’s Starman? Do you want to go to space and remain there for eons to come? Here’s your exclusive chance!

NASA is giving people across the globe a unique opportunity to send their names to the Sun. These names will be stored on a microchip on board NASA’s Parker Solar Probe mission, which will plunge into the Sun’s atmosphere this summer.

“This probe will journey to a region humanity has never explored before. This mission will answer questions scientists have sought to uncover for more than six decades,” said Thomas Zurbuchen, the associate administrator for the Science Mission Directorate at NASA Headquarters in Washington.

ALSO READ: NASA is hiring a ‘planetary protection officer’ and the salary will shock you

If you too want to be a part of this stellar mission, all you have to do is visit the web page of  NASA’s Parker Solar Probe mission and register your name before April 27, 2018. As a memorabilia, you will get a copy of NASA’s ‘hot ticket’ with your name etched on it. 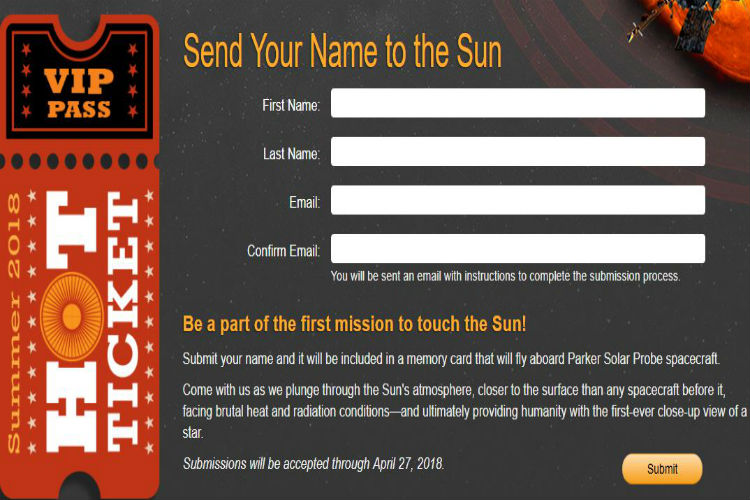 According to NASA, the Solar Probe Plus, which was renamed to Parker Solar Probe in honor of astrophysicist Eugene Parker in May 2017, will travel at a lightning speed of approximately 4,30,000 mph. The spacecraft will be protected from the Sun’s heat by a 4.5-inch thick carbon-composite shield, which will help it to withstand temperatures of around 2,500 F.

“This incredible spacecraft is going to reveal so much about our star and how it works that we’ve not been able to understand,” said project scientist Nicola Fox of Johns Hopkins Applied Physics Laboratory, NASA wrote in a blog.