What would you do if you see mysterious light beams shining outside your house on a cold wintery night? Would you freak out thinking that some alien spaceship is trying to land near your house or would you try catching hold of that notorious friend who is always busy playing pranks on you?

Something similar happened in Ontario, Canada, when beams of light appeared bursting from the space. The spectacular display looked like a scene from a Star-Trek movie and freaked the residents of the city and the Internet users who thought that the aliens were trying to reach out to the Earth.

Well, relax. Though the light show looks pretty creepy, there’s a scientific explanation for it.

Apparently, the phenomenon is called ‘light pillars‘ and though it looks quite similar to the ‘aurora borealis‘ or the Northern Lights, which is caused by the collision between charged particles released from the sun that enter the Earth’s atmosphere with the gas particles, in reality, it’s quite different. 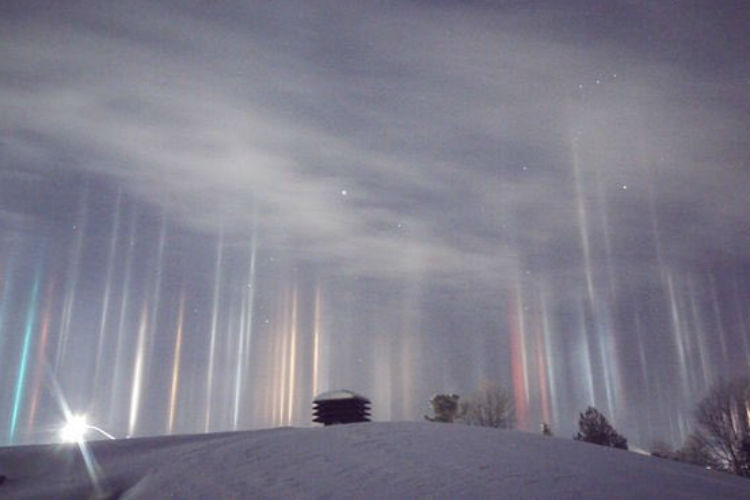 So, what’s the deal with the light pillars?

ALSO READ: If you’re lucky you might witness auroras across US, Canada, Europe today!

Well, light pillars are formed when the hexagonal ice crystals are formed in the atmosphere lower than they usually would. When this happens, the ice-crystals essentially act like a giant mirror, reflecting light upwards or downwards from various sources on the ground like car light and street lamp. The light pillars resemble the sun pillars, wherein the ice crystals reflect the light from the sun.

In rare cases, when the ice crystals are formed closer to the ground, it is called Diamond dust, which gives a halo-like effect.