While iPhone 7 is going to be the highlight of the event, Apple is also likely to introduce Apple iPhone 7 Plus, Apple Watch 2, iOS 10 and MacOS Sierra at the event.

As people across the globe await the launch of iPhone 7, here are snippets from Steve Jobs’ speech at the Macworld 2007:

Thank you for coming.
We’re gonna make some history together today.

This is a day I’ve been looking forward to for two-and-a-half years.
Every once in a while, a revolutionary product comes along that changes everything.
Apple’s been very fortunate. It’s been able to introduce a few of these into the world.
In 1984, we introduced the Macintosh. It didn’t just change Apple, it changed the whole computer industry.
In 2001, we introduced the first iPod, and… it didn’t just – it didn’t just change the way we all listen to music, it changed the entire music industry.
Well, today, we’re introducing three revolutionary products of this class.

The first one: is a widescreen iPod with touch controls.
The second: is a revolutionary mobile phone.
And the third is a breakthrough Internet communications device.

So, three things: a widescreen iPod with touch controls; a revolutionary mobile phone; and a breakthrough Internet communications device.
These are not three separate devices, this is one device, and we are calling it iPhone.
Today, today Apple is going to reinvent the phone, and here it is.

Now, we’re gonna start… with a revolutionary user interface.. is the result of years of research and development, and of course, it’s an interplay of hardware and software.
Now, why do we need a revolutionary user interface? I mean, Here’s four smart phones, right? Motorola Q, the BlackBerry, Palm Treo, Nokia E62 – the usual suspects.
And, what’s wrong with their user interfaces? Well, the problem with them is really sort of in the bottom 40 there. It’s, it’s this stuff right here.
They all have these keyboards that are there whether you need them or not to be there.
And they all have these control buttons that are fixed in plastic and are the same for every application. Well, every application wants a slightly different user interface, a slightly optimised set of buttons, just for it.

Well, how do you solve this?
Hmm. It turns out, we have solved it!
We solved it in computers 20 years ago.
So how’re we gonna take this to a mobile device?
What we gonna do is get rid of all these buttons and just make a giant screen.
We’re gonna use the best pointing device in the world. We’re gonna use a pointing device that we’re all born with – we’re born with ten of them. We’re gonna use our fingers.
We’re gonna touch this with our fingers. And we have invented a new technology called multi-touch, which is phenomenal.
It works like magic. 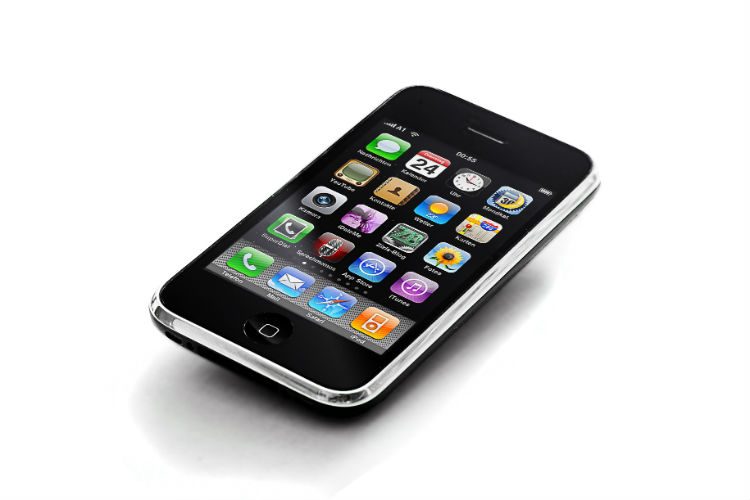 So, so we have been very lucky to have brought a few revolutionary user interfaces to the market in our time.
First was the mouse.
The second was the click wheel.
And now, we’re gonna bring multi-touch to the market.
Now, software on mobile phones is like is like baby software.
It’s not so powerful, and today we gonna show you a software breakthrough. Software that’s at least five years ahead of what’s on any other phone.
Now how do we do this? Well, we start with a strong foundation: iPhone runs OSX.

We wanna reinvent the phone.
Now, what’s the killer app?
The killer app is making calls!
Most people actually dial them every time.
So, we wanna let you use contacts like never before.
You can sync your iPhone with your PC or Mac and bring down all your contacts right into your phone. So you’ve got everybody’s numbers with you at all times.
We have something that’s going to revolutionise voice mail today. We call it visual voice mail.
Wouldn’t that be great if you had random access voice mail?
Well, we’ve got it. Just like e-mail you can go directly to the voice mails that interest you.

Third, we have Google Maps.
And iPhone automatically detects wi-fi and switches seamlessly too.
You don’t have to manage the network. It just does the right thing.

Now, I wanna take a minute and highlight one.
Yahoo Mail.
So, this isn’t just IMAP e-mail.
It is push IMAP e-mail. So when you get a message, it will push it right out to the phone for you. Same as a BlackBerry. Free IMAP push e-mail from Yahoo.
It’s extraordinary.

This is a breakthrough Internet communicator built right into iPhone.
So after today, I don’t think anyone is gonna look at these phones quite the same way again.

What should we charge for iPhone?
Well, for a 4-gigabyte model, we’re gonna price it at that same $499. No premium whatsoever. $499.
And we’re gonna have an 8-gigabyte model for just $599.
Now, when’s its gonna be available?
So here we are, and we’re gonna be shipping it in June in the U.S.
We’re going to Europe hopefully by the fourth calendar quarter of this year.
And Asia in 2008.

And I didn’t sleep a wink last night.
And uh I was so excited about today, because we’ve been so lucky at Apple.
We’ve had some real revolutionary products.
The Mac in 1984 is an experience that those of us that were there will never forget.
And I don’t think the world will forget it either.
The iPod in 2001 changed everything about music, and we’re gonna do it again with the iPhone in 2007.