Cultural shock, by definition, is the “feeling of disorientation experienced by someone when they are suddenly subjected to an unfamiliar culture, way of life, or set of attitudes”. So basically an experience in a new setting which is different from what one has been previously accustomed to. India, being a vast country, has diverse cultures; the north is completely different from the east, the east is starkly different from the south, as are the west and central regions – but that is the beauty of our country. And, it is surprising that in this day and age when people have access to internet and have so many avenues to gain information about other cultures, people still get a ‘cultural shock’ when they migrate from one state to another.

Internet posed a really amusing question for all north Indians and asked them to share their experiences about what were the things that shocked and surprised them when they visited South Indian states. The answers are not just interesting but at times also hilarious. For instance, one person ‘got to know that there are 4 southern states with 4 different languages’. Umm..wow.

So the question one of the Quora users put out there was ‘ North Indian: What was your biggest culture shock when visiting South India?’  Here are some of our ‘favourite’ answers:

Who would have thought a tumbler could leave anyone clueless.

Rice is a staple food in South India and it is actually fascinating how they have so many varieties of rice dishes. Although north India is not behind with its pulao, khichdi, mughlai biryani etc, but South India totally excels in the department. 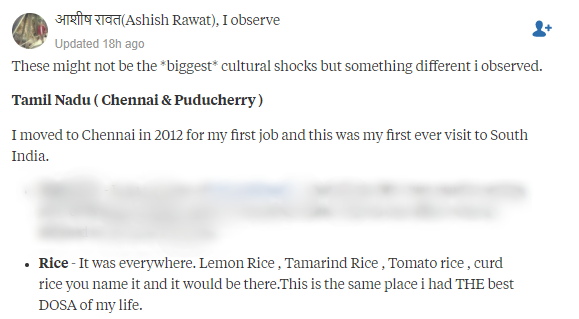 Another Quora user, Saurabh S had this to say:

Yes, there was a Quora user who was ‘so amazed’ to see tall girls.

In a country which is so hush-hush about topics like menstruation, menstruation hygiene, many south Indian states celebrate puberty rituals for girls. So people were shocked to know about such rituals. 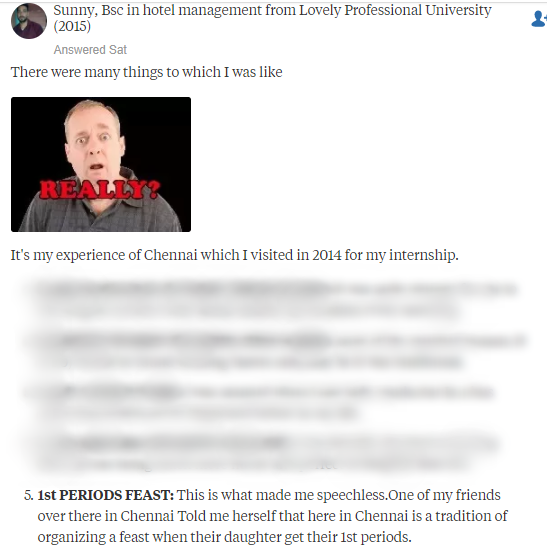 You’ll actually feel for this poor fellow, who missed those brightly coloured  pandals, the bhog and all the revelry that ‘Pujo’ is about. He tried to be ‘brief’ but understandably got carried away. On the brighter side, he got to know about festivals like Ugadi. 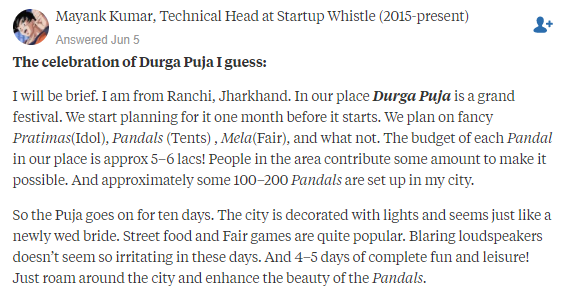 In South India, it’s common to see men wearing lungis or mundus, because of the heat that this part of the country faces. But a Quora user Saurabh S was bewildered to see men wearing it to office, ceremonies and for every occasion.

(Also read: Every dog-parent will relate to Twitter’s latest trend about ‘homecoming’)