There’s no doubting Sooraj Barjatya’s potential of sanskar-ifying anything at all. The man can probably even make a sanskari version of Game of Thrones. It would be a total disaster, I know, but he can do it! Barjatya proved his mettle by coming up with Vivah, a “new-age” (simply ’cause it came out in 2006) romance between Prem, and Poonam, who happens to be the most sanskari Bollywood character ever. Seriously, this girl is so sanskari, when she sings aartis, people cry! After all, what do you expect from one of Alok Nath’s kids.

Coming right to it, here’s every pro-tip on being sanskari just as our age-old traditions dictate (told by Vivah):

1. A woman’s first duty is to be fair
Actually, Poonam or “Bitto” is Alok Nath aka Krishnakant’s late brother’s daughter. And since she’s sugar, no-spice and everything white, he takes her in and bumps her up to favourite child. BTW, this man has a daughter of his own, named Rajni, but nobody pays much attention to her because, well, she’s… *whispers* saavli. Literally, there’s like no scene in the film where Krishnakant has an actual meaningful conversation with his real daughter! I get that Rajni’s a total pain otherwise, but come on! 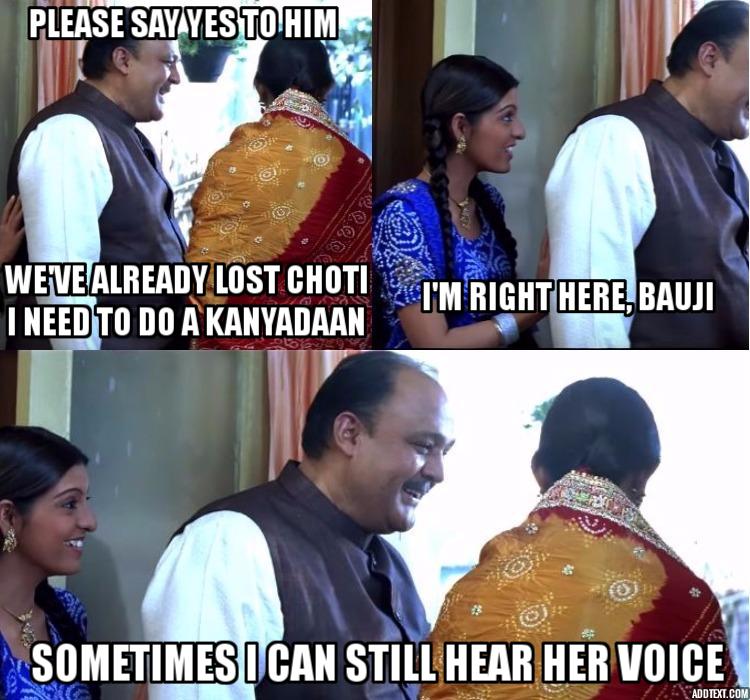 2. Keep that post colonial hangover in check, mate
The rest of the country may have switched to English, but the town of Madhupur is still stuck in an era untouched by it all. Every sentence is as though it’s coming straight out of some Hindi sahitya pustak. This is one of the first times that we hear adult-Bitto talking…

WHO IS THIS WOMAN?! WHERE IS SHE FROM?! WHO SAYS “JAL” ANYMORE?

3. Women should be seen (blushing), not heard
This chick might be sweet for the first three minutes but her antics are a bit hard to take beyond that. Poonam’s only job in the movie (apart from saying “Jal” a bit too often) is to blush and stare at the ground as if she’s been paid to do it. Which, well, she was, I guess.

Both Prem and Poonam speak in hushed tones throughout the movie so much so that you need subtitles for all it (also ’cause… #TooMuchHindi). Even in normal conversation, they would choose to whisper instead of talking normally since being loud is rude apparently. The first audible sentence that Poonam utters is this:

Hold the phone. Stop the presses! Did she just say “paani”?!

On the other hand, boy, would they be able to cheat in an exam hall! But they wouldn’t ’cause that’d be bad and this is, after all, a Barjatya movie!

5. Marriage is duty
When Prem argues that he’s still too young to enter the sacred institution of marriage, his father Harischandra brings out his bramhastra – shastron mein likha hai..etc etc.

Like all sanskari people, he knows that (arranged) marriages are parampara and therefore, trump everything else. 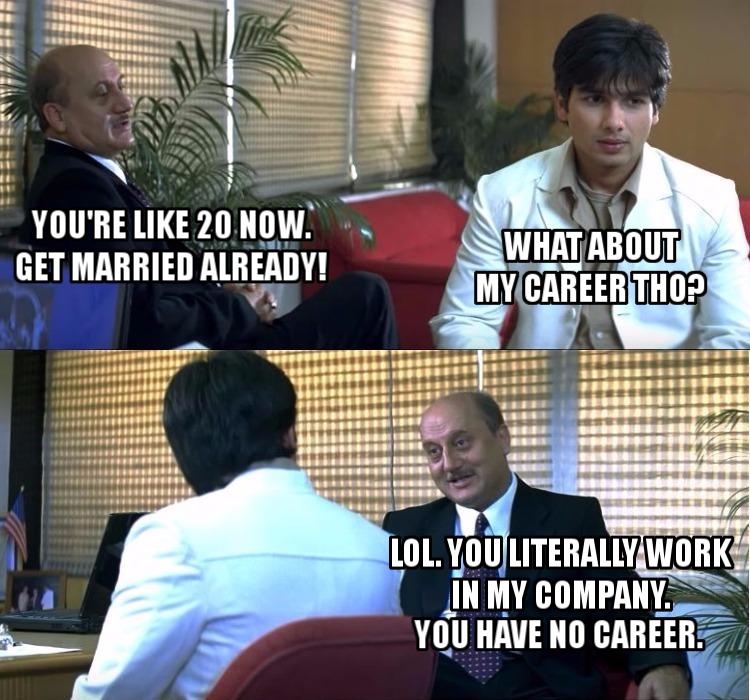 6. Don’t be ugly
Anyway, Harischandra gives him a really long father-to-son chat on why he should get married. Prem is of course not going to say yes. But all that changes until he sees a photo of Poonam.

Even the Bhabhi is totally crushing on Poonam

7. Women, what is an opinion?
When meeting for the first time, Prem and Poonam go up to the terrace (’cause that’s what lovers do, I guess) and Prem just starts a full-on rant about his smoking, drinking habits, his dreams, his crushes, etc. #TMI

And what did Poonam say, you ask? NOTHING.

She just sat there, listened and said yes to the guy! I swear, everyone in this movie is so into looks, it’s frightening.

Poonam says that she likes Prem because he seems just like her Chachaji (her backup daddy). Hmm, that’s not creepy at all, I’m just gonna blow past it… 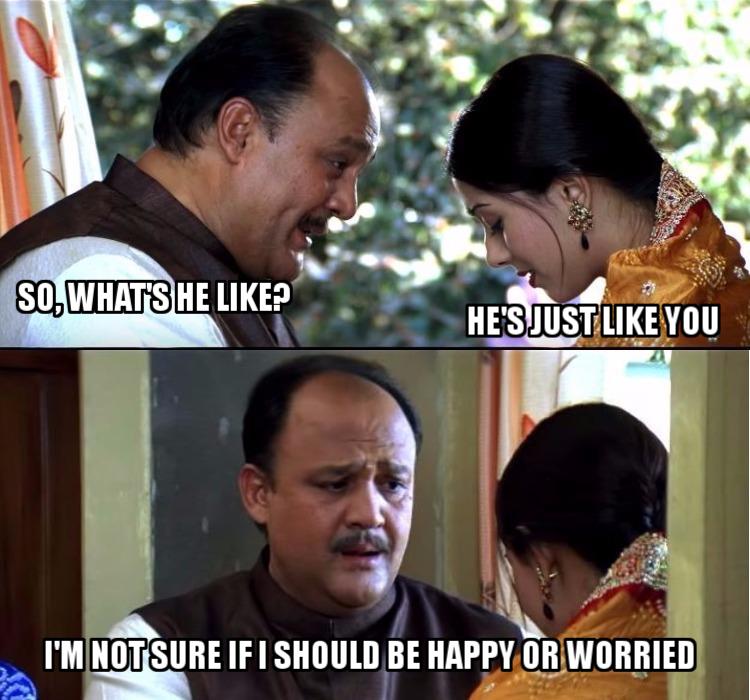 9. MUJHE. HAQ. HAI.
In the garb of a shaant, susheel guy Prem is basically a Grade-A creep. He clicks Poonam’s photos without asking for her permission and makes out with his wife-to-be while a kid sleeps nearby in “Mujhe Haq Hai”. 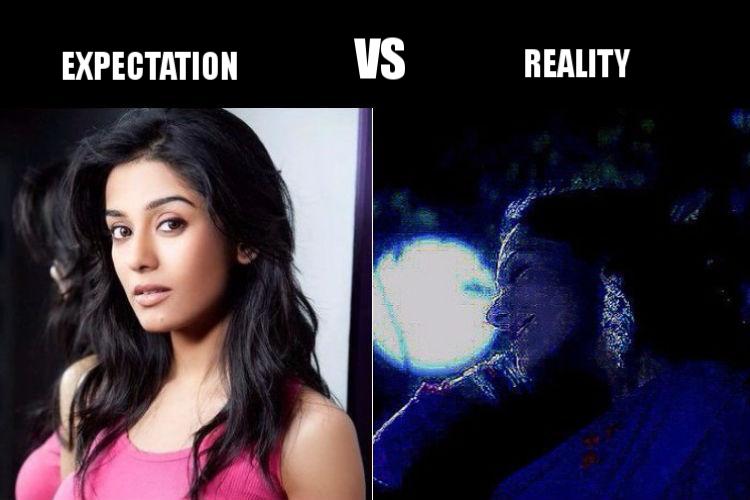 10. If you cannot be yourself, be Ram-Sita
Everyone’s on board with Prem-Poonam because of how perfectly innocent they are. But even all their brimming sanskars cannot come in the way of a perfectly unavoidable waterfall romance.

Or a terrace romance:

BTW, wasn’t there a child on the terrace there? WHAT IS WRONG WITH THESE PEOPLE?!
Also, this is what a kiss looks like in a Sooraj Barjatya film:

11. In a world of cruel sort of step-moms, be Cinderella
Even though Poonam’s Chachiji/adoptive mother doesn’t even look at her straight or can go a minute without being rude to her, Poonam will not stop being nice to her mean step-mom. Which, for the record, is sad and incredibly patient of Poonam. 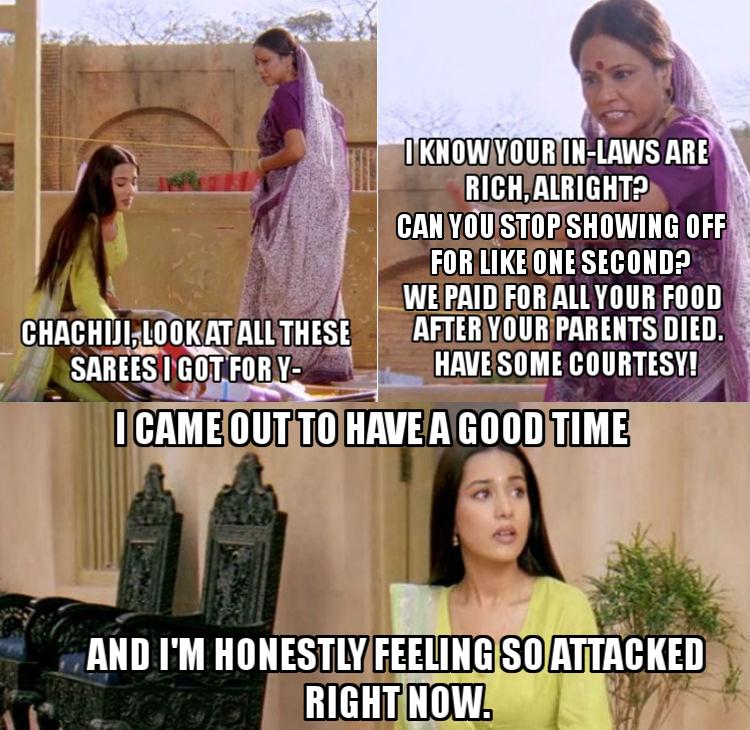 12. Beauty > Everything
So, Chachiji has always hated Poonam because she’s pretty and gets all the attention from the father while her own dark-skinned daughter lies in one corner of the house. But all that changes when one fine day, Rajni is just chilling in that same corner and the house catches on fire. 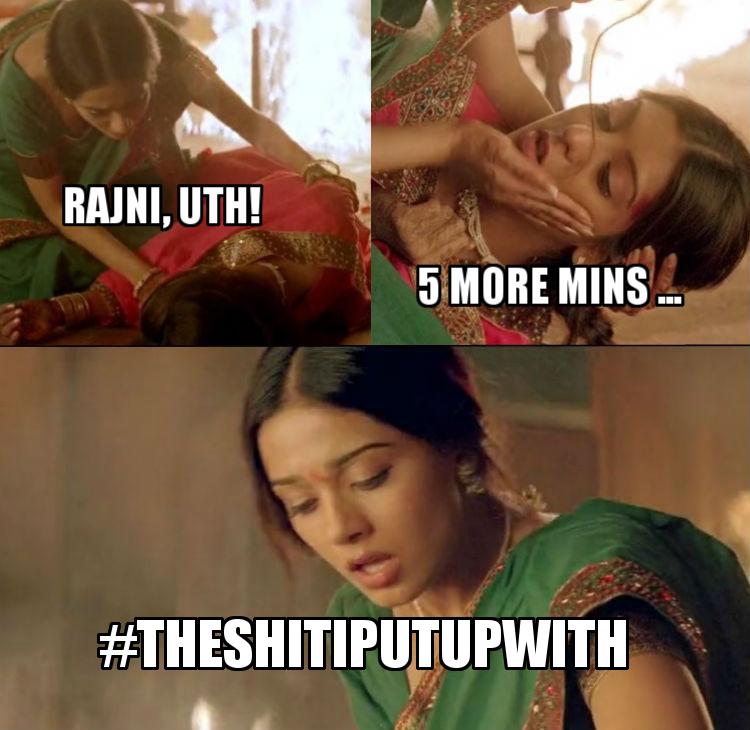 Poonam selflessly manages to rescue her sister but fails to save herself from a burning grill. And all of a sudden, everyone else suddenly wants the wedding to be called off.

Even Poonam’s self-esteem is in shambles thanks to this family that cares more about whether or not her face is fine.

You know, now that her beauty is a goner, she’s nothing. NOTHING!
Seriously, the only sensible one out of all the people in the hospital (doctors included) is her fiance. 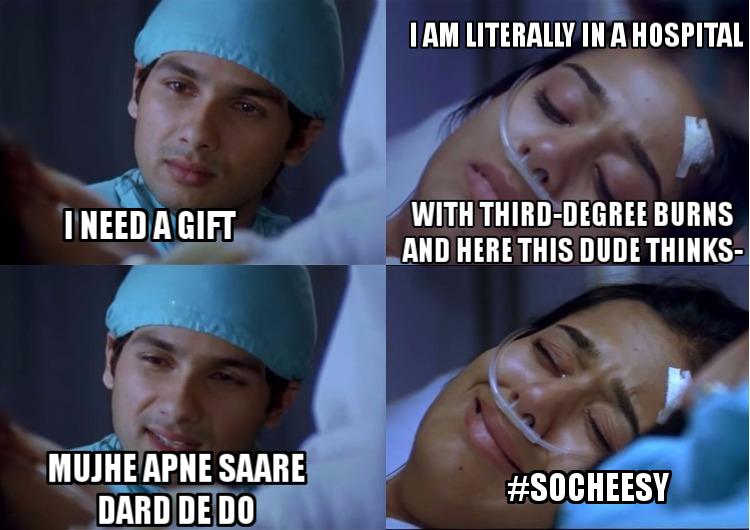 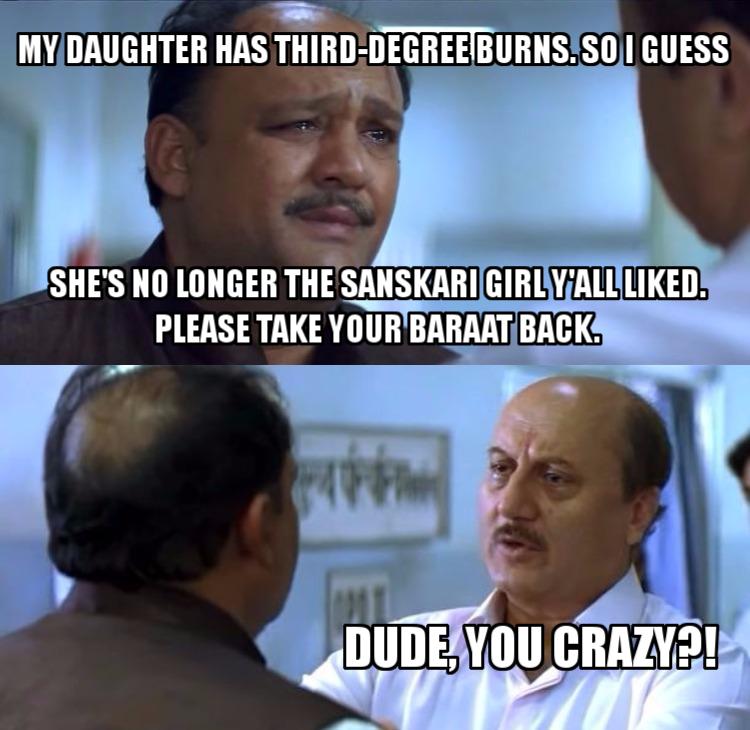 After confirming with the doctors whether his married life will be affected by Poonam’s burns (#IYKWIM), Prem accepts her wholeheartedly.

13. Submitting yourself to your hubby is not optional
It’s only fathomable that a story like this would head in such a direction. After successfully getting Poonam, a recovering third-degree burns patient, to the mandap, Prem still wants his first night because- “Mujhe haq hai”. 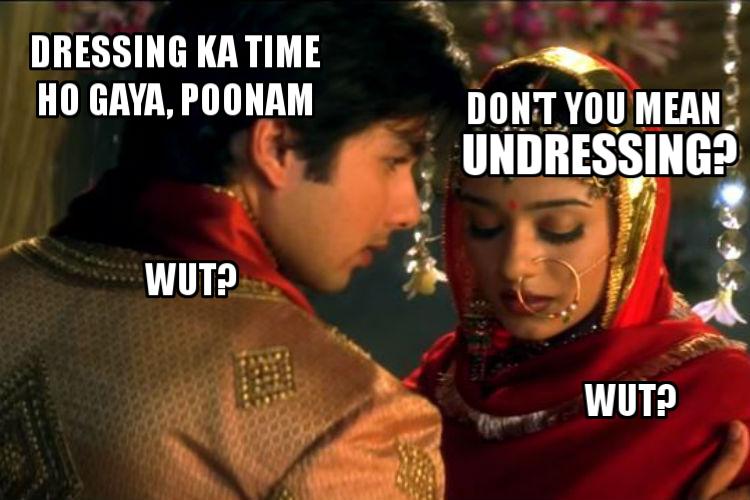 Also, who- just who thought it would be a great idea to put “Samarpan ki bela aayi re sajni” in the background? It’s a suhaag raat scene! A’ight mate? We get it.

Anyway, everyone’s happy so I guess it ended well. But seriously, Sooraj Barjatya – do you EVER watch your own films?