When people think of romantic dramas in Bollywood, they usually turn to movies like Mohabbatein or Devdas or Dilwale Dulhania Le Jayenge, but they always miss out on Dhaai Akshar Prem Ke. Which is strange because it is truly one of the most underrated Bollywood movies of all time.

Abhishek Bachchan plays the role of Karan, a brave army captain who is deeply in love with Nisha (Sonali Bendre). If you’ve seen the movie and you don’t remember her ever being there, it’s probably because she has like 4.78 secs of screen time. On the other hand, there’s Sahiba, or if you prefer her full name- Sahiba Garewal, Sector 17, Mall Road, Palampur- a beautiful, shy, college-going student away from home played by Aishwarya Rai.

The film opens with a monologue from Sahiba on surprise, surprise- LOVE! And it is at this moment that a potential romantic film turns into a comedy.

1. The meet greet
What is Bollywood’s sure-shot way of finding love? A man rescuing a woman playing the damsel in distress. On his way home, Karan spots Sahiba is being chased by goons. One fight scene later, they find themselves replicating the iconic DDLJ train scene with way too much intensity and emotion than boarding a train requires.

Unbeknownst to Karan, Sahiba is caught between a rock and a hard place and her solution is jumping off a waterfall. But, then there’s Karan to the rescue (yet again)!

SOMEHOW, they both end up falling off the cliff and how does Karan respond? By yelling at the poor suicidal girl.

Legit a minute into her backstory and out of nowhere her family assumes she has eloped to get married. We can see where Sahiba gets her crazy from. Where did that come from? Why so weird, fam? And why did Sahiba not correct their misconception? WHAT IS WRONG WITH THESE PEOPLE?

3. Karan selflessly decides to go with Sahiba to… Er…?

Sahiba is afraid of going back home in light of recent odd events, so Karan offers to tag along. Because the way to set misconceptions right is to bring a stranger home. Also, does he have nothing better to do? And wasn’t he planning on spending his vacation with the love of his life, Nisha?

4. Stranger meets dramatic family, becomes instant damaad
Sahiba shows up at home with Karan and everyone assumes they are married. Gee! I wonder why. Probably because didn’t correct them earlier? YOU KNOW, ON THAT PHONE CALL WHERE HER AUNT ASKED IF SHE IS MARRIED AND SHE SAID YES.

We’re just about 30 minutes into the movie BTW

5. Nobody thinks to bring up the fact that THEY’RE NOT MARRIED!
Neither Karan not Sahiba clarify that they are not married. A pleasant reminder for everyone. Next time someone assumes you and your friend, sibling, co-worker, the stranger you don’t know, or that tree you’re standing next to, are married, it’s best to clarify it right then and there.

6. Parents be like: “Please have sex in our beds.”
Okay. WHAAAAAAAAT?! At first, the father did not approve of Karan and then suddenly he and his entire family literally pushes them into their belated ‘suhag raat’ in the PARENTS’ BEDROOM! BRB, I’ll be throwing up for 72 years.

7. No seriously, legit EVERYONE is interested in their sex lives

8. Truth delayed is truth denied
Eventually, Karan tells everyone that the woman he says he’s married to and spends every night with, is not his wife. Everyone is taken obviously aback and then this happens…

9. Plot twist: Sahiba is now in love with Karan because, why not
Karan and Sahiba knew from the start that their ‘relationship’ is not to be taken seriously. Especially since Karan is in love with someone else. But, when she sees him washing her cousin’s bum in the middle of the courtyard (OMGWHY), Cupid obviously strikes (EWW).

Sahiba’s feelings continue to grow as Karan fails to notice all the obvious signs. 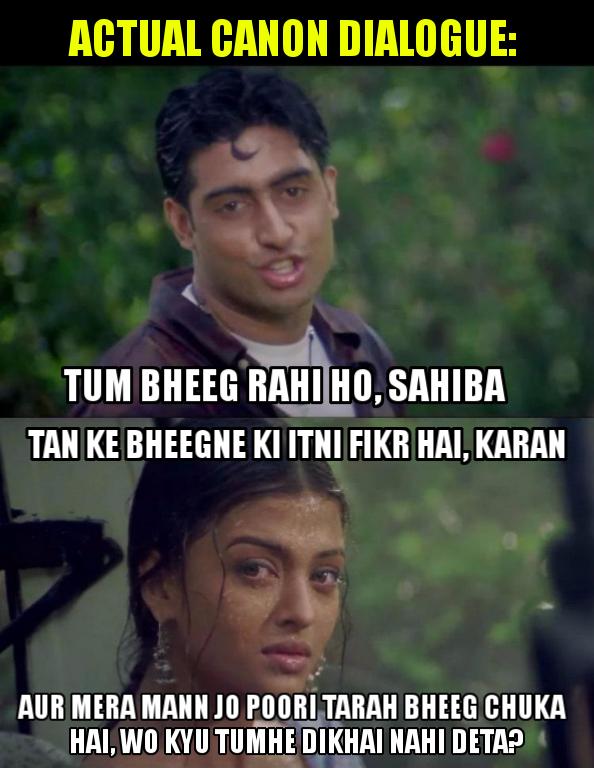 10. Karan realises he too has feelings for her… when he sees her dance.
The next logical step in a film that has no plot, is a dance. Karan now develops feelings for Sahiba because Aishwarya Rai’s dancing skills will do that to you.

The complex scenario was still fixable but then Sahiba gets imaginary-pregnant in her imaginary-marriage because she vomits while on fasting.

12. After that series of unfortunate events that make no sense…
After all of this, Karan who after accompanying a random stranger home and not clarifying with her family at any point that they are not married – has finally had enough and runs away. Imaginary pregnancies can really trigger some folks.

13. Hello, friendzone. My old friend.
Finally reminded of his one true love, Nisha, Karan seeks her out only to be told that she has gotten married to someone else. Are you horrified on his behalf? Wait. He never told her he loved her. He just expected the woman he loves to remain single for him till the time he decides to come back and propose. Also, what was his deal with Sahiba then? Did he fall in love with her before or no?

A heartbroken Karan decides to head back to Sahiba. Because something is better than nothing. #TrueLove

14. BTW, is Amrish Puri a psychopath here?
Yogi (Amrish Puri) can’t go two seconds without dropping a death threat to anyone. Be it Sahiba, Karan or his own brother. And why is nobody worried about his violent proclivities?

While Karan was away, Daddy decided to get his daughter married for real and he literally is forcing his choice on her.

15. Another plot twist: Sahiba’s dulha turns out to be a murderer

Well, on the plus side at least they did not leave a loose plot point.

16. What happens next will not shock you

Seeing his plans of getting married as planned, crazy fiance does this…

18. How can you have a wedding and have NO ONE question where the dad is?!
What’s really crazy is that while Karan and Daddy Yogi are trapped in that burning building, nobody at the mandap seems to worry where the father of the bride is until the pandit brings it up. Somebody needs to show this guy what goes on at a real Indian wedding.

But, it’s chill ’cause daddy makes his way out full 007 style. You know… like in every typical Indian wedding scenario.

19. Sahiba needs therapy
Just like before, when faced with a difficult situation, Sahiba decides that the solution is to kill herself. Unable to bring herself to marry a psychopath, Sahiba sees there’s only one way to survive – zeher-wala-prasad.

20. But the fam wants several chutkis of sindoor

Unaware that Daddy Yogi is MIA and the dulha is a murderer – the family begs Sahiba to just get on with it. Sahiba, who is allergic to explanations, clarifications, justifications or any conversation that could have saved her from this complies.

21. And then they lived happily ever after
Poison works its way through Sahiba and doctor’s say she can’t be helped but then… #baegic
She’s healed AND gets pregnant before Karan ever steps foot outside the house again.

Forget Hum Saath Saath Hain, you guys. This is the family film you were all waiting for.