Taylor and Zayn have come together to drop the hottest music video on the charts right now: “I Don’t Wanna Live Forever” for 50 Shades Darker.

The steamy new music video, which dropped on the 26th, shows the two pop superstars living an extravagent life but battling the dread of separation and emotional longing. It shows a tale of emptiness, heart-break and longing for love, framed in a ‘Fifty Shades of Grey’esque backdrop.

The video begins with Zayn stepping out of a limo in the rain as paparazzi chase him through a plush hotel. He enters an elevator and meets Taylor and Both Zayn and Taylor being to smash everything in plain sight!
They’ve got their serious looks and booze on in this anguish filled video and look très hot.

The video has some soulful lyrics which are kinda heart-rending:

Been sitting eyes wide open behind these four walls, hoping you’d call
It’s just a cruel existence like there’s no point hoping at all

Baby, baby, I feel crazy
Up all night, all night and every day
Give me something, oh, but you say nothing
What is happening to me?

I don’t wanna live forever, ’cause I know I’ll be living in vain
And I don’t wanna fit wherever
I just wanna keep calling your name until you come back home 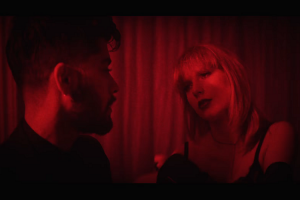 Both Taylor and Zayn have been missing from the spotlight for a while now and fans have been anticipating there next releases. Both of them have released the music video on their YouTube VEVO channels.

Taylor and Zayn dropped the news on the Twitter on the 25th, a day before the music video released:

The song is written for the feature film by Swift, Jack Antonoff, Sam Dew and produced by Antonoff and Saul Germaine for Universal Studios. The chart-buster is directed by Grant Singer.
The much-anticipated ‘Fifty Shades Darker’ sequel is scheduled to hits theaters on February 10th.