After Abhay Deol put up a series of adverts on his Facebook page yesterday taking a sarcastic dig at B-town celebs for promoting and endorsing fairness products. Only one of them responded to his jibe, and then got hilariously trolled. Abhay Deol posted ads of Shah Rukh Khan, Deepika Padukone, Sonam Kapoor, Shahid Kapoor, John Abraham, Vidya Balan, Ileana D’Cruz and Siddharth Malhotra, and of all of them, Sonam Kapoor decided not to keep quiet.

The actress, popular for her arrogance and zero acting skills, posted an ad of Abhay’s cousin, Esha Deol promoting a skin-whitening product on her Twitter handle and asked Abhay for his opinion on it. To which Abhay responded saying ‘Is wrong too. For my views read my post.’ She still couldn’t accept that she was wrong and posted a sarcastic tweet again saying ‘Thank you Abhay, I shot this campaign ten years ago and didn’t understand the ramifications. Thank you for bringing this to forefront.’ But Abhay was the star yet again, he tweeted back saying ‘More power to you Sonam Kapoor may be you can use your power as well to take this further than the forefront.’

She must have thought she would get the support of her fans and the rest of the Indian ‘janta’ but her move hugely backfired and she got heavily trolled after which she has, now, deleted all her tweets.
Here are the screenshots of her tweets and the amazing repsonses the Twitterati poured on her:

Is wrong too. For my views read my post. https://t.co/Jw9CNINd6t 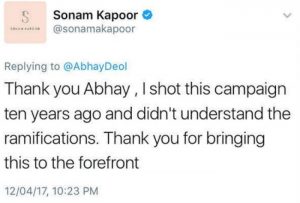 More power to you @sonamakapoor maybe you can use your power as well to take this further than the forefront. https://t.co/FVJcj2Wp7T

@AbhayDeol @sonamakapoor I would say just ignore her because she doesn’t even believe that she’s in industry because of #nepotism..

@AbhayDeol @sonamakapoor If you guys only sort it before a controversy then Who’ll give content to @karanjohar for #koffeewithkaran guys?

@AbhayDeol @sonamakapoor My respects to Abhay Deol for standing up to this “fairness” nonsense .. way to go bro.. God bless!