Phrase: To put one’s foot in one’s mouth.
Meaning: say or do something tactless or embarrassing.
Usage in a sentence: Abhijeet Bhattacharya.

Though we agree that India is a democracy and we have freedom of speech, certain people shouldn’t be allowed to express an opinion. By certain people we mean the infamous singer Abhijeet Bhattacharya. From brainlessly defending Salman Khan to passing tasteless comments on Pakistan, the notorious singer is a personified version of ‘Twitter Trolling’. He has yet again put his foot in his mouth by passing bizarre comments on Sanjay Leela Bhansali and the Padmavati incident.

The entire ‘Padmavati’ fiasco started when Sanjay Leela Bhansali was assaulted on the set of Padmavati in Jaipur by workers of Shri Rajput Karni Sena.
The incident caused much furore, and the cast and crew were forced to pack up and leave the location. The video showing Sanjay being attacked went viral and received a lot of flak from everyone on social media:

The Rajput sabha alleged that Sanjay Leela Bhansali’s film Padmavati is going to show a dream sequence of romance between Alaudin Khilji and Rani Padmini, and this was not acceptable as they felt it defiled the Rajput queen’s legacy. This letter was sent out prior to the incident: 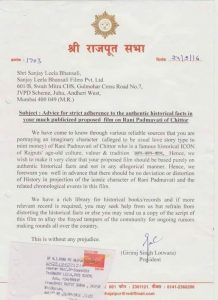 When no action was taken by the director after receiving the letter, the sabha decided to show up on the sets and take matters into their own hands.

The lead actors Ranveer Singh, Deepika Padukone, and Shahid Kapoor, took to Twitter to make their clarifications on the entire issue:

Whats happened is very unfortunate. We hope the people of Rajasthan will understand & empathise with our intentions & give us their support.

Sanjay Sir is one of the most accomplished & authentic filmmakers we have in India, & he wont ever do anything to hurt anyones feelings.

As a team, we are making ‘Padmavati’ keeping in mind the sensitivities and emotions of the people of Rajasthan and the Rajput community.

As Padmavati I can assure you that there is absolutely no distortion of history.#Padmavati

Sanjay bhansali is a film maker who the country should be proud of. You will know when u see #padmavati the dignity he brings to it.

Then came in Singer Abhijeet with his downright shameful comments. He called Bollywood an industry run by “chakkas and gays” and claimed Bollywood is an Anti-Hindu industry:

While we are aghast, these vile comments are in perfect keeping with his previous atrocities. Yes, everyone is entitled to their opinion, but we really hope somebody just cuts off this guy’s WiFi already.

Tell us your thoughts while we go and look for some duct-tape.