Ladies and gentlemen, 2017 just got a whole lot better.
The international touring carnival ‘Mad Decent Block Party’ is back in India with Major Lazer and DJ Dillon Francis!
After the mad debut of MDBP in India last year, they’re all set to rock the Indian sub-continent again. MDBP began in 2008 and since then has become one of the hottest travelling festivals to look out for.

Major Lazer, (Diplo- one of world’s most in-demand producers,DJ Jillionaire and Walshy Fire) who’ve ruled the charts with their iconic Bollywood-esque number ‘Lean On’ (we’ve heard everything from bhangra to garba remixes) are super excited to be back in India with DJ Dillon Francis who has made crazy chart-busters like ‘Get Low’ and ‘Bun up the dance’.
Major Lazer is all set to drop their new studio album this year and the first single from the album ‘Cold Water’ feat. Justin Bieber and MO already lit up the charts in 2016.

Apart from these headliners, other awesome acts in the festival will be announced soon.
The 3 city tour will be hosted in Mumbai, Hyderabad and Delhi and this is what their jam-packed schedule in India looks like: 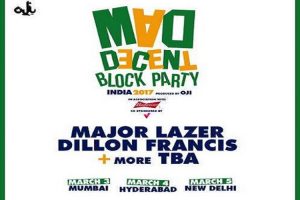 Fans went into a frenzy when they made the announcement via this crazy but adorable video on their page:

The tickets already are up for sale on Insider.in and on Paytm for Rs 2,800. Do we need to tell you to grab em before they disappear?
As a wise man once said, it shall be lit and we can’t wait!