Someone asked me if Lipstick Under My Burkha was a film about lesbians. Like seriously? I shook my head and told them: No, it is about women embracing their sexuality. To which the person replied, “Oh so, it IS about SEX?” Again, how as far as ignorant fools go, this one was at the verge of going insane with logic. I shrugged and answered, “It doesn’t mean that.” And while I may have found it important to explain it further, the problem is that because of the nature of debate surrounding the film which is set to release on July 21, the film is receiving all sorts of misnomers.

Lipstick Under My Burkha has faced its share of controversy and the film has emerged victorious from the battle of censors and cuts. Ekta Kapoor, who is the producer of the film, is at the helm of all the blows that the film has received for being forward and the phrase which is being used openly is “too lady oriented.” It is like saying “Would you like some tea?”

“Oh, did you make it without sanskaar?”

“Because then it is too lady oriented for my taste!”

And as Ekta Kapoor launched the trailer of Lipstick Under My Burkha alongside the director Alankrita Shrivastava and the star cast of Konkona Sen Sharma, Ratna Pathak Shah, Aahana Kumra and Plabita Borthakur, she was met with questions that could have easily mirrored the ignorance of our society, the Censor Board, our very own Pahlaj Nahlani, and of course that includes you lot of reporters too.

Like the boss that she is, Ekta Kapoor shut down her reporters telling them that film isn’t at any point vicarious. “For anyone hoping that the film was “a dirty picture”, would be terribly disappointed,” chimed in Ratna Pathak Shah who plays a middle-aged woman called Usha, who is on a journey of exploring her sexual desires. 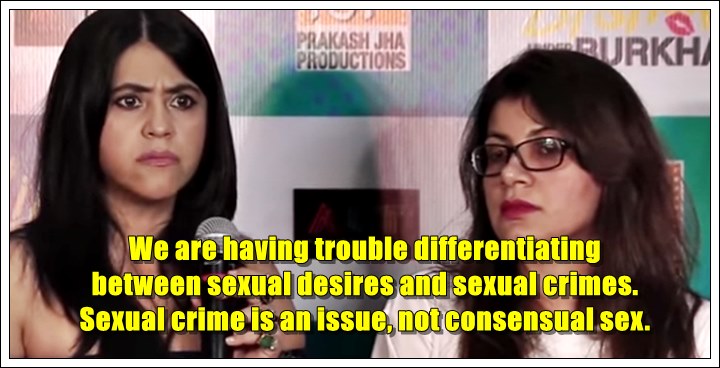 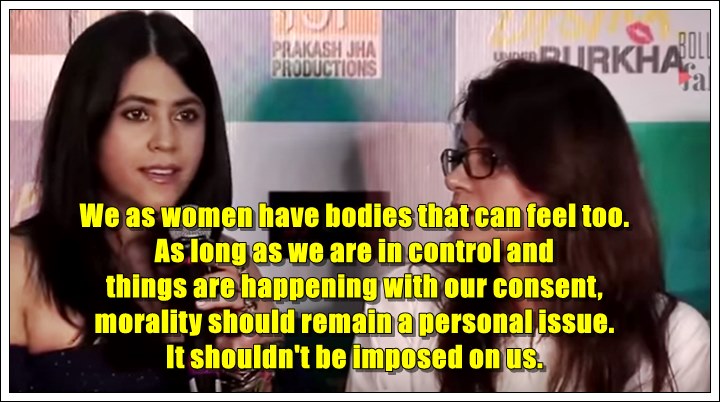 As Ekta puts it, Morality shouldn’t be used as an excuse by men to behave.

The Prakash Jha production has finally got a release date after the Film Certification Appellate Tribunal (FCAT) decided to give it an Adult Certificate. And as the everyday armour of a woman’s sense of self chips away we can only hope that more films and dialogues of such issues will be discussed beyond burkhas and closed doors.