Actor Abhay Deol has shared Emami’s Fair and Handsome poster on his Facebook page which has Shah Rukh Khan’s photograph on it. All of us have seen King Khan selling Emami’s Fair and Handsome and asking all the young men to stop using women’s fairness creams (Ssssh.. Fair and Lovely). Abhay Deol has translated the the ad in English from Hindi and the entire description goes like ‘And the King Khan himself asking you- (Translated)- “Being a man why are you are still using a women’s FAIRNESS cream!?” He’s clearly trying to make you a man, becoming whiter in the process is just a side effect.’ Oops!

Although celebrities like Shah Rukh Khan, John Abraham, Shahid Kapoor, Kajol, Deepika Padukone, Sonam Kapoor, Siddhart Malhotra, Vidya Balan, Yami Gautam and Arjun Rampal have been endorsing these ‘skin-whitening’ products for quite some time now, the timing of Abhay Deol’s posts are important because of the  recent brutal attacks on Nigerian nationals. Celebrities like Kangana Ranaut and Ranbir Kapoor  took a stand against selling these creams and refused to do any such adverts. Abhay Deol has gone ahead saying ‘We are not racist’ and taken a dig at almost all of these Bollywood celebrities.
Most of the Indian janta is just too brilliant and does fall for these ads. We still have ‘fair and beautiful’ and ‘fair and handsome’ descriptions in the matrimonal advertisement sections and still talk in terms of ‘gora-gori’, ‘kala-kaali’, ‘saanwla-saanwli’ (dusky). So, basically colour and complexion is most important. Okay? Okay.
So here is that awesome post of Abhay Deol we are talking about. Don’t we love him for this! 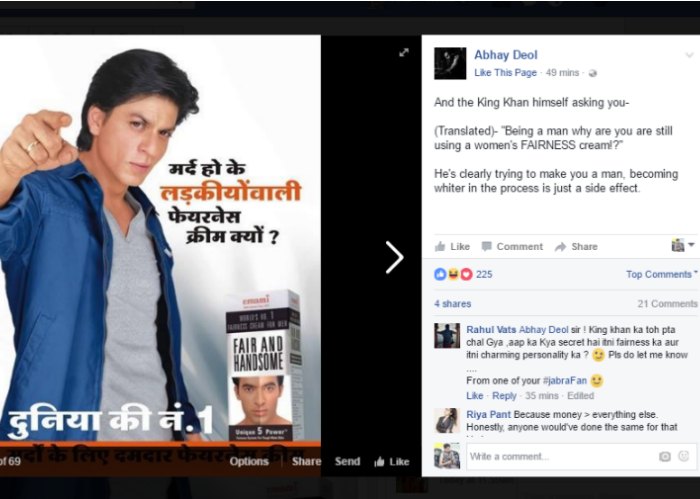 Abhay Deol hasn’t spared the other Bollywood celebs who endorse these skin-whitening/fairness products proudly and unfortunately, the list is long :