Back when Bollywood was plagued with romantic comedies, Rajkumar Kohli went a different way and in 2002, he presented a whole new kind of film- Jaani Dushman: Ek Anokhi Kahani, a film so anokhi, it will render you speechless. While many would jump at the chance of going back in time and undoing the movie, I’d say that it is actually quite beautiful. No, seriously!

You can judge the movie all you want to but there are several highlights from the movie that make it completely worth your time.

1. The film is actually a genre hybrid 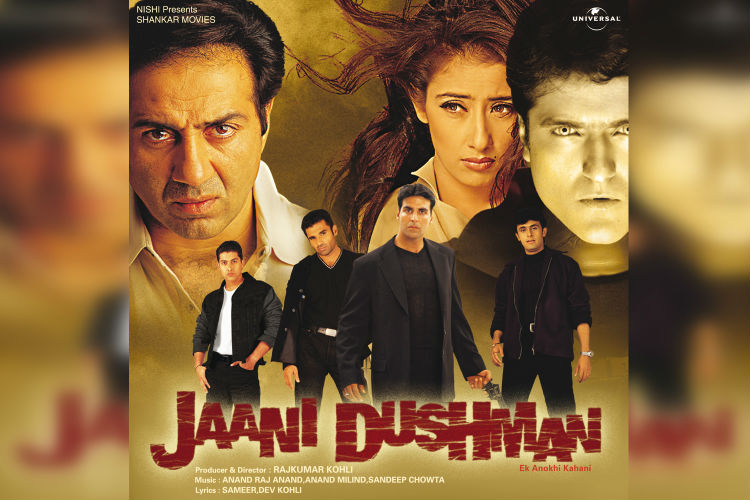 Jaani Dushman: Ek Anokhi Kahani is so unique that it spans across several genres. It is legit a horror fantasy romantic comedy drama action movie.

2. It also doubles as a coming-of-age story of an Indian chick
Divya (Manisha Koirala) is one of the central figures in the film. During the course of the film, Divya goes through several stages of womanhood like falling in love, facing sexism and discovering that her true self is actually a reincarnated snake (Vasundhara) with a reptilian lover (Kapil).

3. Eternal love story between serpents
Vasundhara and Kapil are two snakes who know what eternal love is all about- dancing in human forms across badly designed CGI terrains and of course…

4. Awesome Nagin dance
Speaking of dancing, would you look at this awesomeness! Snakes TOTALLY dance like that… It’s almost like they ARE snakes.

5. No fillers whatsoever
While most other films will shift focus to side-plots and filler moments to beef up the movie, this film delivers an action-packed story so densely stuffed, you’d probably have trouble catching up with what’s even going on.

6. Real life lesson #1- Rough sex has to have limits
Aside from being extraordinarily entertaining, Jaani Dushman: Ek Anokhi Kahani also holds deeper meaning as there are subtle teachings hidden between its incredible plot. Teachings such as, never take sex too far, especially on suhaagraat, when you don’t know what your spouse is capable of.

7. Real life lesson #2- Rape/molestation is apparently okay + forgivable
After Divya nearly gets raped by Rajesh (Rajat Bedi) and Madan (Siddharth Ray), the mighty huge star cast takes turns to remind her one by one that one must forgive and forget lest the atmosphere gets too suffocating. Seriously.

8. Real life lesson #3- All men must die
Forget Game of Thrones, this was the real deal. Ten minutes into the movie, the viewer is introduced to a brutal death, followed by several others, highlighting the uncertainty of life. #ValarMorghulis

9. Shedding light on what happens in girls hostels for curious men
Guys have always wondered what happens behind the closed curtains of a girls’ hostel. Well, this film bares it all for the curious ones out there. Apparently, women love taking showers together with their makeup on.

10. Awesome soundtrack
If you think this film has any end to awesomeness then, you must check out its fire playlist. You’ll find it hard to keep songs like Aaja Aaja and Jaaneman Tu Khub Hai out of your mind.

11. Formidable snek villain
An action film is as good as its villain and this film has a great one. It’s a snake. But it’s not just any snake. It’s a shape-shifting, age-defying, bullet-dodging, bike-flying, psychopath snake (who also happens to be the director’s son).

12. THE best special effects
Never before Jaani Dushman: Ek Anokhi Kahani had we ever seen such awesome special effects and I don’t think we ever will again. The VFX in this movie is unmatched. Also, unlike other films, where you can’t tell the difference between what’s real and what isn’t, this movie keeps it real and distinguishable.

13. Aaaand, Sonu Nigam
This film is a freaking gold mine! Here is only time that you will see Sonu Nigam acting. Even amid accomplished actors like Akshay Kumar, Sunny Deol, Sunil Shetty and Arshad Warsi, it is most certainly his acting chops that take home the naagina. #SingerActorGoals