A Chinese video game fanatic was left paralyzed from waist down after he played for 20 hours straight at a cyber café in Zhejiang province.

The man, whose identity has not been disclosed, reportedly entered the café on Saturday evening and kept playing without a break till afternoon the next day.

The gamer found out that he was unable to move his legs when he attempted to go to the toilet.

“It seems he had lost sensation completely and couldn’t move at all. We had to call for an ambulance,” news website QQ.com quoted his friend as saying. 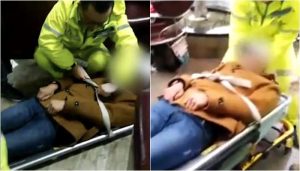 An ambulance was called out to the internet cafe and the gamer had to be lifted out and secured to a stretcher.

However, the man was more concerned about the game as he was heard begging his friends to complete the unfinished game while being wheeled away.

The incident has an eerie similarity to a case in 2015 were a 32-year-old Taiwanese man was found dead in an internet cafe after he played games for three days consecutively without a break.

Last year, a 21-year-old woman lost her vision in one eye after she played video games on her mobile phone for 24 hours straight.

Notedly, China was the first country to officially declare internet addiction as a clinical disorder.

Video game addiction poses a big challenge for China’s youth- as increasing number of young people are cut out from their social lives and chose to spend their time in virtual world.