A Nigerian man fulfilled his father’s lifelong dream of owning a luxury car in the most ostentatious way possible. He buried him inside a brand-new BMW X6 costing over £66,000 (Rs 60 lakhs). According to a local news outlet, the billionaire, who is identified as Azubuike, lost his father to old age and had promised him that he would one day get him a luxury car. After he lost his father, he decided to honour him by burying him in a BMW.

The photo was originally posted by Zevi Gins on Facebook and has gone viral. It has been shared over 22,000 times.

Most people on social media condemned the guy’s action, saying that he could have rather donated the money to a charity that helps the poor rather than wasting it all. Though Nigeria is one of the world’s fastest-growing economies, a third of the country’s population live below the poverty line. 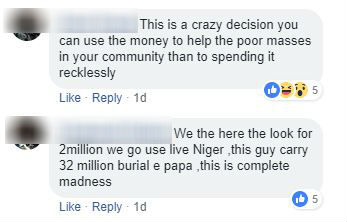 Though a few did find the humour in all this.

In a similar incident, another Nigerian billionaire buried his mother in Hummer in 2015. The same year, a man in China also buried his relative in a station wagon with the help of a crane. In 1988, a Detroit kingpin was buried in his gold-plated Mercedes Benz after he died in a shootout.