Miss Universe 2000 and Bollywood actress Lara Dutta recently tweeted how she used her husband Mahesh Bhupathi’s towel to stop rain from seeping into the house. A day later, the former Indian tennis star reacted to his wife’s activity and it seems he was not at all happy. Bhupathi accumulated all those towels after representing Indian tennis four times in the French Open and Wimbledon, twice in the Australian Open and in the US Open thrice. When he came to know about his wife’s actions, he was not so happy.

While the heavy rain is taking a toll on Mumbaikars, Lara Dutta tried to save her house using her husband’s towels. She took to her official Tweeter account and wrote,”“Putting our Wimbledon, US Open, Aus Open &amp;French Open towels to good use!@Maheshbhupathi #MumbaiRain.Stay safe &amp; indoors if possible folks!,” 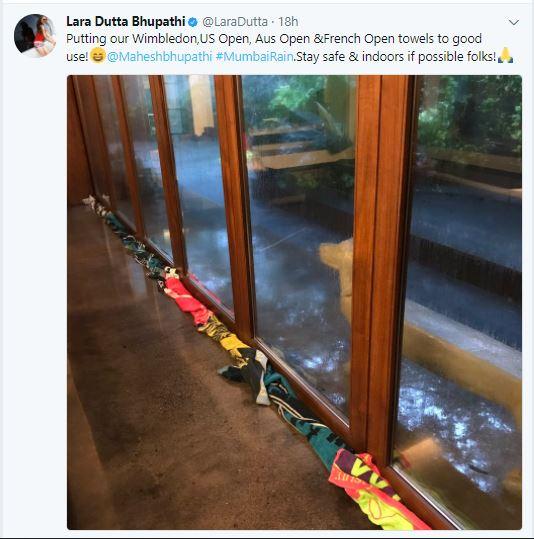 Lara Dutta’s Tweet how after putting towels beneath the door

In response, Bhupathi reacted to this tweet like a typical Indian husband. Probably he was shocked with what his wife did with his precious towels and he strongly expressed himself on the social media. He took to his twitter account and shot back. He wrote,”Are u kidding me !!!! That’s years of hard work.”

Are u kidding me !!!! That’s years of hard work https://t.co/3ihImzbOWa

Later, the Bhupathi family also opened arms to help those who were stuck in the rain.

The Maharashtra government and civic authorities sounded the high alert as torrential rains lashed Mumbai, Thane, Palghar, Raigad and other parts of the state for the fourth consecutive day, severely affecting normal life and paralyzing the city’s lifelines — local train and bus services — in the state capital.