India’s famed discuss thrower Karamjyoti Dalal brought glory to the nation by clinching a Bronze medal at World Para Athletics Championships in the F55 category. This happens to take India’s medal tally to 3 at the current moment which is great news for the contingent. Dalal’s last throw turned out to be the game-changer as she managed to throw 19.02 mts, which is great. She edged out Alomari Roba
(19.01m), by a narrow margin.Earlier, the other two athletes who managed to get their name in the medal list were Sundar Singh Gurjar and Amit Saroha, who won a gold and a silver medal respectively.

But things did not shine or look up for Dalal last time at the games, as all her three throws were adjudicated as disqualified and she never managed to get off the mark. In that regard, this in a way is a statement by the lady. Yet, Dalal came back to raging form during the Fazaa International IPC International Athletics Grand Prix in Dubai. This was earlier in March where she clinched gold in the same category.

But, it was Sundar Singh Gurjar, who opened India’s account at the World Para Athletics Championships by bagging gold in the men’s javelin throw event. A couple of days later, Amit Saroha added to the tally when he won a silver medal in the club throw event in the F-51 category.

Dalal finished fourth at the same event when it was held in 2015. She is currently world number 8 and with this bronze medal in her kitty, it should help her climb the rankings. 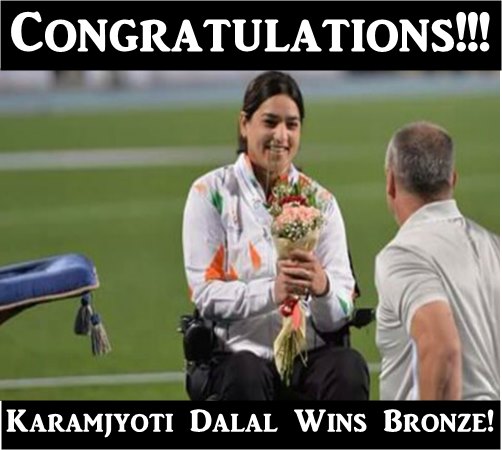 What she has been lacking till this point in her career was lack of support and funds from the government. Even during interviews in the past she has said that with good sponsors coming in, her game will only improve.