When we talk about partnerships, the bond between cricketers Sachin Tendulkar and Sourav Ganguly is eternal. We have seen these legends walk out in the middle for India and win many battles. Touted as one of the best batting duos in the world, it is difficult to think of differences between the two, let alone a rivalry.  While cricket united them, football has separated the two. Both Sachin and Sourav have been rooting for their respective teams, Kerala Blasters FC and Atletico de Kolkata (ATK) in the ongoing Indian Super League (ISL). The third edition of ISL has reached its final stage and as fate would have it, the two legends are all set for a final face-off.

After the group stages, both Kerala Blasters FC and Atletic de Kolkata qualified with Mumbai City FC and Delhi Dynamos FC being the other two qualifiers. Mumbai City FC were table toppers with 6 wins, 5 draws and 3 losses in their 14 games with 23 points. Kerala came second with 22 points in their group matches. The team registered 6 wins, 4 draws, and 4 losses. Delhi Dynamos FC recorded 5 wins, 6 draws and 3 losses with 21 points. Atletico de Kolkata was the last qualifier with 4 wins 8 draws, and 2 losses securing 20 points. 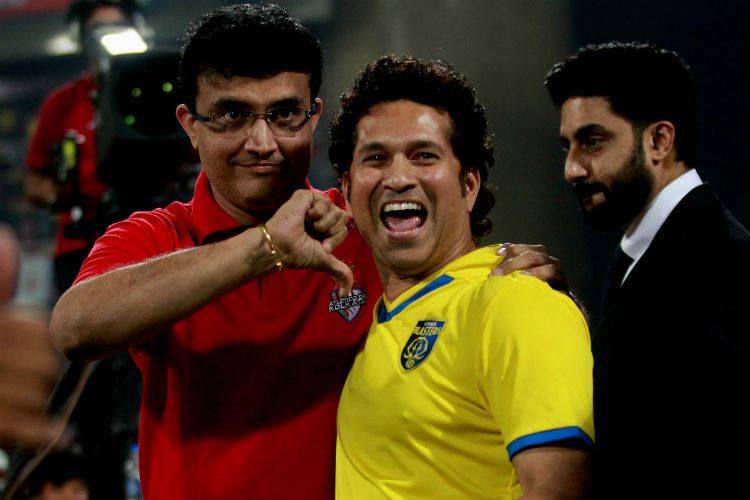 In the first leg of semi-final 1, Atletico de Kolkata beat Mumbai City FC 3-2 at the Rabindra Sarobar Stadium in Kolkata. ATK’s striker Iain Hume was declared the Player of the match. In the first leg of semi-final 2, Kerala Blasters FC defeated Delhi Dynamos FC at Jawaharlal Nehru Stadium. Defender Cedric Hengbart was adjudged the Hero of the Match. The second leg of the semi-final 1 between ATK and Mumbai City FC was a goalless draw at Mumbai Football Arena. Kolkata became the first team to qualify for the finals owing to their win in the first encounter. ATK’s midfielder Javier Lara was the Hero of the match.

The decider between Delhi Dynamos FC and Kerala Blasters FC went all the way to the penalties. After full-time Delhi were leading Kerala 2-1 but due to their 1-0 loss in the first leg, the winner had to be decided through penalties. Kerala held on to their nerves and won 3-0 as Delhi failed to convert any of their shootouts. Despite the loss, Hero of the match was awarded to Delhi’s defender Ruben Rocha.

The two teams were pitted against each other in the finale of the inaugural edition. Sourav Ganguly’s men won the contest by 1-0. Will Ganguly’s men repeat what transpired in the first season or Tendulkar’s men will blast the opposition and seize the day? The much talked about clash would take place on December 18th. May the best team win!