India’s star footballer Sunil Chhetri became the fourth in the list of leading goalscorer (active international players) by surpassing England footballer Wayne Rooney. To celebrate this IPL team Gujarat Lions owner Keshav Bansal took to Twitter to express his happiness on the news but ended up trolling himself. Bansal’s tweet read, His tweet read: “Let’s take a moment to talk about @chetrisunil11, the Indian footballer who has been ranked 4th in the world for scoring the highest runs. [sic]”

Bansal got heavily trolled on Twitter as he referred to Chhetri scoring more runs instead of goals. It seemed Bansal had a brain fade moment as he mixed Football with Cricket. After being trolled on Twitter brutally for the faux pas, Bansal deleted his tweet. 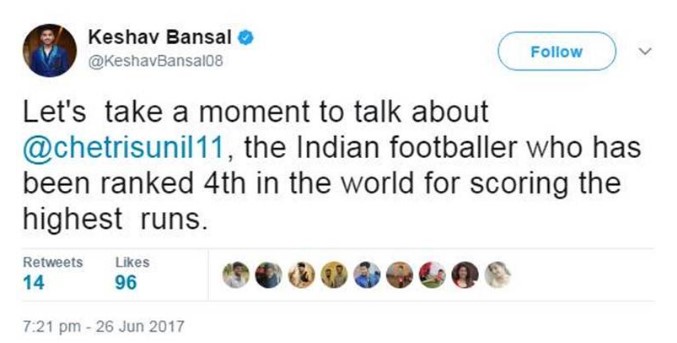 So Sunil Chetri is a secret cricketer as well.@KeshavBansal08 tweeted about this.
pic.twitter.com/7TRbOd0HZK

Bansal’s Gujarat Lions did not do well in the Indian Premier League (2017) as they were out of the race of reaching the qualifiers too early in the tournament. His team led by Suresh Raina could only win 4 out of 14 matches as they ended up on the 7th spot in IPL 2017 standings. Though his team did well in their first tournament ending up first on the IPL 2016 standings with most wins in the tournament.

Really and he is owner of an IPL Team.
Dear @KeshavBansal08 don’t praise our athletes until unless you don’t know about them completely. https://t.co/O28XMHIyOc

Though his team did well in their first tournament ending up first on the IPL 2016 standings with most wins in the tournament. Gujarat Lions is much likely to get scraped as they only had a 2-year contract as Rajasthan Royals and Chennai SuperKings return to the fold.

@KeshavBansal08 what about Chettri the run machine

Chhetri got past Rooney as he scored a match-winning goal against Kyrgyzstan in the 69th minute during AFC Asian Cup Qualifier held in Bangalore earlier in June. His crafty goal in the 69th minute turned the things in India’s way as it was the only goal scored in the match. Chhetri scored his 54th international goal for India.