Despite his disappointing performance in the ongoing world cup, Lionel Messi’s reputation as one of the greatest footballer ever to grace the game remains unchallenged. Ask Guddu from Bengal’s Bidi hub, Dhulian in Murshidabad district of Bengal. “We have thousands of Bidi manufacturers in this town and for us too branding is important. There is not a single person in this state who hasn’t heard of Messi and since the World Cup is on,  it makes a lot of sense to bring out special edition bidis named after football stars,” says Guddu of Guddu Bidi factory, Dhulian.

The Argentine footballer is especially popular in the state and posters of him adorn street corners of even the most remote mofussil towns. Giving him company is Portuguese footballer Ronaldo, whose name is used by another Bidi Brand in the state. 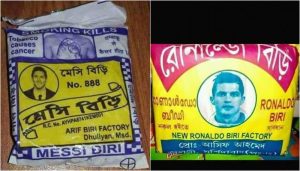 Bengal’s sweet obsession with football is hardly a secret. Though India is yet to earn the right to be part of the biggest soccer tournament in the world, the eastern state’ love for the game is nothing less than extra ordinary. For a Bengali football fan, An adda would not be complete without a debate over the superiority of East Bengal or Mohun Bagan or between Maradona and Pele. In pre-independence era, cricket was restricted to elite as it grew under the patronage of Maharajas and Britishers and football was the sport of ordinary man.