Men’s cricket is a goldmine for Board of Control of Cricket in India (BCCI). Expensive advertisements and bids for telecast rights pour in as soon as a tour or tournament is announced by the BCCI. On the other hand, women’s cricket matches start and end without the common people ever getting to know that they even took place.

Nowadays, tracking live scores has become easy for cricket fans, courtesy applications that provide ball-by-ball commentary. But is it too tough for BCCI, which happens to be the richest cricket board in the world, to arrange a live telecast of women’s international matches? Can’t DD sports, which is a state-owned TV channel, borrow live streaming from Sri Lanka Cricket (SLC) Board and telecast it live?

It is understandable that not much revenue can be generated from telecasting these matches as compared to men’s cricket. But, the success of Women’s World Cup 2017 showed the world that there is a sizeable demand for women’s cricket.

As a result, few players started getting recognised which led to brands chasing after them for endorsements. Wasn’t this a big chance for them to monetise women’s cricket as well and use the interest in their favour? But, no. They did not get the TV rights for India’s tour of South Africa — even though the men’s cricket team was touring the same country.

Forget about telecasting, bcci.tv website does not even have a live scorecard on their homepage. Is that too much to ask for as well? 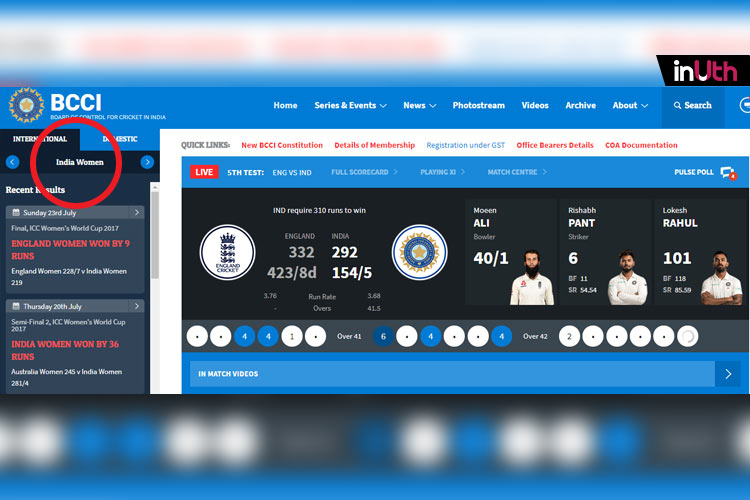 The ongoing India’s tour of England is one of the most talked-about tournament. Despite being a dead rubber, the fifth Test is being telecasted in different languages. On the contrary, one cannot tune to watch India women’s tour of Sri Lanka, which exposes the double standards of BCCI.

We have lost enough years of women’s cricket already — their rise to the top, Mithali’s flamboyance on the field etc. With the success they have achieved, they don’t deserve to play in the shadows of men’s cricket.

Now, if you are wondering about what happened in the first ODI, here’s what went down at the Galle International Stadium:

Mithali Raj-led India won the first ODI by 9 wickets with 181 balls to spare. Jhulan Goswami picked up her 300th international wicket. Mithali Raj played her 118th ODI as captain, most by any woman cricketer. The fan favourite Smriti Mandhana scored an unbeaten 73 from 76 deliveries after a splendid performance by the bowlers dismissing the hosts for 98.

Here’s the streaming of the match on Sri Lanka Cricket’s YouTube page: