Indian skipper Virat Kohli had a gala time in the year 2017. After Mahendra Singh Dhoni stepped down from the captaincy, Kohli became the skipper across all the three formats of cricket. That was just the beginning for the 29-year-old Delhi cricketer. Under his leadership, India didn’t lose even a single bilateral series this year. Even though the ICC Champions Trophy finals was a setback, later what he and the Indian team did was undoubtedly phenomenal.

After clinching yet another win against the Lankans, Kohli has taken a much-needed break so he could prepare himself for the forthcoming South Africa series. And before we witness his monstrous batting on the foreign soil next year, let’s have a look at his performance in 2017:

January 5, 2017 – Appointed as captain across all formats

MS Dhoni shocked his fans after stepping down from the captaincy in ODIs and T20Is. Kohli became the skipper across all the formats.

Though India lost the last ODI match to England in Kolkata, India won the series 2-1. Yuvraj Singh scored his ODI best (150) in Cuttack in the second match along with MS Dhoni who also scored a century.

ALSO READ: Virat Kohli gets his 50th international century with a six and Twitter floods with wishes. Read reactions

India beat England by 2-1 and won the first T20I series this year.

It was the first Test series against Australia under Kohli’s captaincy. Even after losing the Pune Test by 333 runs, India bounced back and won the 4-match series by 2-1. It was a joint victory for Kohli and Ajinkya Rahane who led the team in Kohli’s absence in Dharamsala.

Virat Kohli and Co beat the arch-rivals Pakistan in their opening game by 124 runs (D/L).

After smashing them in the league phase, the Pakistan cricket team came back hard and strong and defeated India by a massive margin of 180 runs.

Virat Kohli became the first captain ever to whitewash Sri Lanka at their home in a Test series. India won the 3-match series by 3-0.

VIDEO: #TeamIndia Captain @imVkohli makes an admission to @cheteshwar1 and challenges him for a game of badminton.

Under Kohli’s captaincy, India played 3 Tests, 5 ODIs and 1 T20I and won all of them, thereby winning the entire series by 9-0.

October, November 2017 – Defeated Australia and New Zealand one after the other

Kohli reached this feat in his 200th outing for Team India in ODIs. He surpassed former Australian captain Ricky Ponting and became the 2nd batsman, after his idol Sachin, to have the maximum number of tons in ODIs.

After scoring a duck in the first innings in Kolkata, Kohli bounced back and scored his 50th international ton. 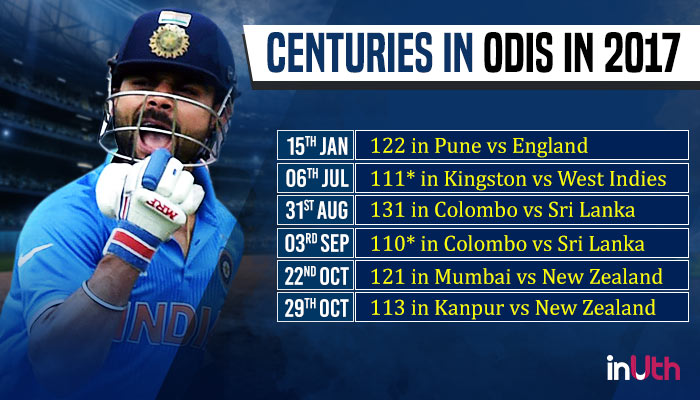 Virat Kohli’s performance in ODIs in 2017

Kohli surpassed Brian Lara and became the only captain in international cricket to have 6 double hundreds in Test cricket.

The runs have been flowing for the Indian Skipper as he scores his 19th Test ton. Second in the series so far. #INDvSL @imVkohli pic.twitter.com/oOUhMAhyCJ

Kohli scored 610 runs and reached this feat. He is the 4th batsman on this list which is topped by Graham Gooch who made 752 runs against India in 1990.

Surpassing former Indian batsman Vinoo Mankad’s record of 526 runs, Virat Kohli has entered the elite club of batsmen who have scored 600 runs in a series (batting 5 or fewer innings). The other two batsmen on this list are Sir Don Bradman and Mohammad Yousuf.

December 5, 2017 – 2nd Indian captain to score a double-century and fifty in the same Test 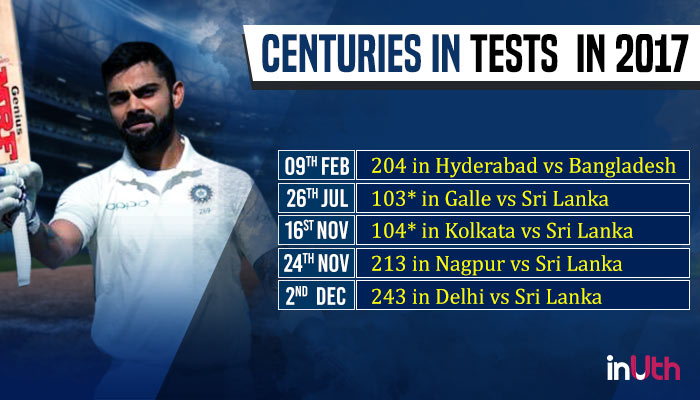 Virat Kohli’s performance in Tests in 2017

Since 2015, Virat Kohli & Co have not lost a single Test series this year. This streak began with beating South Africa in 2015. The count is 9 and still going on.

The Indian captain has scored 2818 international runs in this particular year. It’s the 3rd highest after Kumara Sangakarra’s 2868 scored in 2014 and Ricky Ponting’s 2833 scored in 2005.

After all the above-mentioned achievements in his kitty, Kohli will rest for almost 2 weeks before leaving for South Africa. The first Test starts on January 5, 2018, in Cape Town.