Yuzvendra Chahal is enjoying his time off ahead of the limited overs series against South Africa. From posting workout videos to photos of his outings, Chahal is quite active on his Instagram account. Recently, Chahal posted a photo of himself holding a golf club. Rohit Sharma, who came across the picture decided to troll Chahal for his skinny physique, but he clearly didn’t anticipate Chahal’s smart response.

Here’s the photo that Chahal posted:

Taking a swing at the golf course #T20 #outofthepark

Rohit did his best to troll Chahal but the latter resorted to golf terminology to counter him. Here’s how the conversation went: 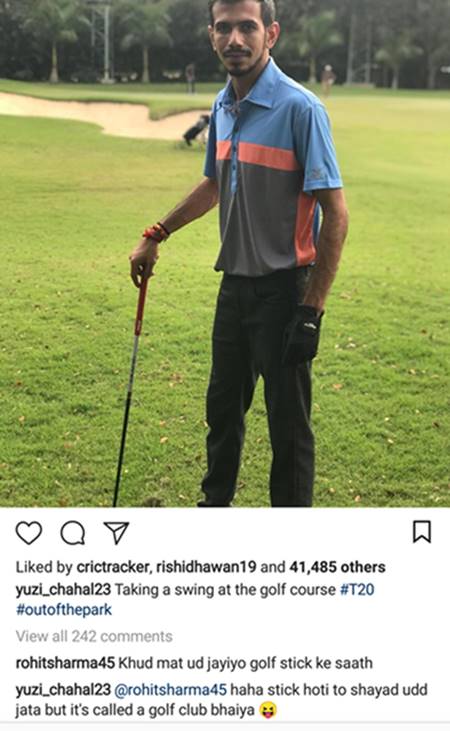 Chahal’s reply was no less than a googly from the legspinner that caught Rohit off-guard. India’s fielding coach Ramakrishnan Sridhar too joined the conversation as he trolled Chahal by commenting, “With your power, it’s a hole in one on a 5 par”.

Chahal was recently trolled for posting a video of his workout with weights where he joked that he can lift heavier weights than Royal Challengers Bangalore (RCB) teammate Chris Gayle. The Windies cricketer was surprised by Chahal’s conversation with South African cricketer Tabraiz Shamsi.

ALSO READ: Yuzvendra Chahal claims he can lift heavier than Chris Gayle, gets trolled by him & fielding coach R Sridhar

Chahal is currently gearing up for the upcoming limited overs series against South Africa. Chahal has been India’s most successful spinner in limited overs circuit for the past two years. The 27-year-old has managed to replace Ravichandran Ashwin on the Indian side.

With the advent of legspinners in modern cricket setting, Chahal will be on the list of franchises in the upcoming Indian Premier League (IPL) 2018 auctions. However, RCB might exercise their Right to match (RTM) card to get him back into the side.